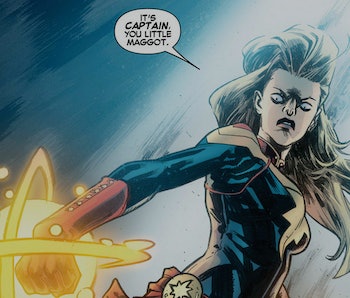 Marvel began its assault on American theaters in 2008 with Iron Man, a sly commentary on the post-9/11 military industry boom. Released three years later, Captain America: The First Avenger offered a globalist vision of nonproliferation. Unfortunately, international cooperation in the MCU proved problematic, so the now post-Civil War Avengers operate as untethered interventionists, a non-governmental organization built to promote peace in fictional countries like Wakanda, on other worlds, and eventually in other dimensions. In the United States, aggressive humanitarianism is understood by many as part of the Clinton Doctrine.

Age Of Ultron goes a long way, in scenes set in Wakandan vibranium mines, to answering Clinton’s big rhetorical question: “What are the consequences to our security of letting conflicts fester and spread?” But if a Clintonian stance has characterized the MCU’s build up, the next major player represents a turn in a different direction.

Captain Marvel, as she appears in Marvel comics historically, and in contemporary series by Kelly Sue DeConnick, Michele Fazekas, and Tara Butters, has a different set of priorities than say, Captain America. In 2015’s comics, Carol Danvers often drops in to alien planets in order to rearrange or renegotiate their cultural systems. In 2016 comics, she leads the Alpha Flight space program protecting the Earth from extraterrestrial threats.

She exerts herself on behalf of Earth (and a largely Americanized Earth), and she does this because she thinks in absolutes. Like Black Panther, a king, Danvers lacks the ambivalence to power — or the exercise of power — that has characterized so many of the Marvel heroes’ origin stories. Even before being made into a superhuman, Carol Danvers was a pilot comfortable in a leadership position. To understand how significant this is, it’s best to start at the beginning.

Phase One: America In Decline

The collection of origin stories now referred to as Marvel’s “phase one” films began with Iron Man in 2008, and ended in 2012 with The Avengers. The themes and values that tied those films together included redemption for past wrongs, transformation and confronting heroes with new, modern values.

Though both Iron Man and Captain America experienced their superhero origins in their first films, they both underwent internal transformations which were ultimately more important in aiming the MCU’s trajectory. Tony Stark began his first film as a weapons tycoon, and ended it as an icon who “privatized world peace.”

Steve Rogers never buys what Stark is selling because he is, in a much more traditional sense, a warrior. He was also, notably, Stark’s father’s militarized guinea pig, painfully changed into a Stark-patented machine. Having served as a propagandist and a soldier, he develops a singular disinterest in politics. Captain America fights America’s enemies without giving to much thought to what America is or whose interests he is furthering.

Marvel began their “phase one” films in a post-post-9/11 arena, long after the dust had settled on a muted, nationally agreed-upon definition of “heroism.” Though none of the heroes ever pursued religious conflict — the blowback would have been massive and the international box office meager — Marvel managed to jam a lot of political archetypes into their movies. Stark is a libertarian. Captain America is a member of the greatest generation, the largest Republican voting block. However, if our heroes have learned anything, it’s that neutrality is a difficult stance to maintain.

Phase Two: The Rise Of Globalism and Trauma

“Phase two,” which began with Iron Man 3 in 2013 and ended in 2015 with Avengers: Age of Ultron and Ant-Man, complicated the MCU’s politics by expanding the universe’s scope. Post-traumatic stress was the primary theme of “phase two”; Tony Stark, Loki, Bucky Barnes, Rocket, Scarlet Witch and Quicksilver all seem to suffer from it on some level. Five out of the six movies making up Marvel’s second phase included at least one sobering shot in which a superhero considers the damage one suffers after conflict.

Post-combat stress and fatigue are extremely complicated political issues in the United States. The American wars in Iraq and Afghanistan left thousands of American soldiers, many of whom enlisted out of patriotism after 9/11, coping with extreme stress. The VA reports contain staggering numbers. The suicide rates among American soldiers have been at an all-time high for the past seven years, and the number is not going down.

For the MCU to comment in a subtextual way on this very American epidemic is evidence of its political agenda. The movies don’t damn the source of PTSD outright; instead, they dwell on the idea that we don’t know how to help the people who reportedly protect us.

Though Ant Man was made, like Guardians of the Galaxy, to be a superhero comedy, the most sobering moments in both films dealt with coping with one’s past. In Ant Man, we meet our hero as he is released from prison. In Guardians, Starlord notices the wicked, painful-looking scars on Rocket’s back. Nothing is said. Nothing needs to be.

These movies present problems, not policy. And, in so doing, they duck the debate while suggesting that our world isn’t equipped to support or make sense of true heroes — that heroism is a sort of stigma.

Civil War also introduced a hero whose ideas will help shape the rest of “phase three.” In Wakanda, technology is the greatest technology for governance, which makes monarchy work rather well. T’Challa is one of the most intelligent engineers alive, and diving into his work in his native country, among the Dora Milaje and his devoted followers, will shift the MCU’s focus toward the idea of progress.

Doctor Strange, Guardians Of the Galaxy, Vol. 2, and Thor: Ragnarok all side-step the question of the question of American politics by centering their drama in alternate dimensions, or in outer space. Though Captain Marvel will most likely involve a great deal of extraterrestrial combat, Carol Danvers has a long, military history as an American soldier, and has actually been more combative and ruthless than Captain America ever was. In the current comics, she has the most in common with her sometimes-boyfriend War Machine.

Why is Captain Marvel so important to “phase three”, in particular? Aside from being the studio’s first female protagonist in a solo film, she’s also the third self-identifying soldier to join the fray, behind only Cap and War Machine. What does that mean, exactly, for Carol Danvers to have always identified as a soldier? Most language used by American military branches describes the soldier’s role as a “defender of the United States Constitution against enemies, foreign and domestic.” Captain Marvel will likely operate as a representative of the United States, in addition to being a superhero.

Whether or not the MCU honors Danvers’ long history of cracking down on oppositional views, in order to portray her the way she appears in her contemporary comics, they’ll have to make her hard-nosed and argumentative. She’s about as lenient as Tony in a debate, and serves as the cool and calculating muscle in A-Force, Marvel’s all-female Avengers.

Carol Danvers operates as an emissary rather than an invader, though she uses military tactics to find ways around bureaucracy. She’s a more realistic character operating in a more modern setting, not defined by her relationship to conflicts she didn’t start. She is a fully realized individual with her own opinions, outside the Avengers, or A-Force, or Alpha Flight. That’s a complicated thing — and something we haven’t seen in the MCU just yet.

Civil War debuted in the middle of the hot, American summer which saw the Republican Party choose Donald Trump as its presidential candidate. The far right, now fifteen years removed from 9/11, is rooting for a hunkered down, isolated, and reactionary America. Donald Trump voters may find Carol Danvers to be a breath of fresh air.

That said, Marvel will choose which Carol Danvers to deliver to the public in 2018, and its notable that the script for her first film is likely in the works now, as the nation ramps up to the presidential election. A year ago, the two writers penning Captain Marvel, Meg LeFauve and Nicole Perlman, expressed to Wired that the script was proving far more difficult to finish than Guardians of the Galaxy, their previous Marvel screenplay.

On one hand, Danvers acts peacefully on other planets, much like a member of the Federation in Star Trek, but on the other hand, intervening in other cultures to improve, restructure, or demolish them has become an integral part of what America has done over the last few decades. Danvers doesn’t question herself as an emissary or diplomat in her comics, even when things go awry, so she’ll look unusual if placed with her ego intact in an MCU full of neurotic, anxiety-ridden superheroes.

Even if the MCU plans to present their first female cinematic solo hero as a multi-faceted “person”, they’ll still have to commit to making her either a soldier, and therefore an annoyance to Stark, or a diplomat, and therefore an annoyance to Captain America. Her natural ally might end up being Black Panther, but that would be a team of rivals. Those characters stand for different people and different ideals, but they both feel comfortable wielding power. After the politics comes the governance.