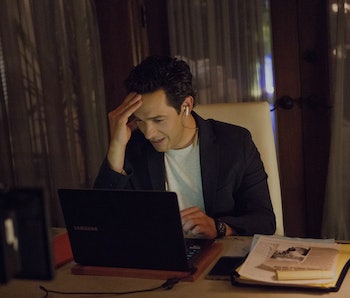 It’s dizzying to watch a show as formerly trustworthy as UnREAL spin off the rails into, first, stomach-turning, and then just bemusing territory. It’s not like watching a trainwreck – so much as a locomotive detaching individuals car-by-car, which topple off the tracks, slide down the mountain, and meet the river below. It’s similar to the feeling of watching Twin Peaks after the reveal of Laura Palmer’s killer — of sticking with Season 2 as it doubles down on that Nadine-as-cheerleader plotline. UnREAL, sadly, has none of Peaks’s unintended laughs.

Before exploring the other minutiae, let me reiterate: Lifetime’s sole prestige-y show is now categorically #bad. It is now painfully clear, just one episode from the end of the season, that writers are sweeping the police shooting incident under the carpet. It is a side point now, and not for the right reasons. The series is really not going to show us Romeo again, or explain what happened to him. Darius is going to continue to do Everlasting… without going off the rails about Rachel and Coleman’s call to the police. The show’s focus, primarily, is right back on Quinn and Rachel’s personal struggles and love life, and it’s not going to budge. This is, on every level, bad behavior.

If you’ve read the recent New Yorker profile of UnREAL co-showrunner and former Bachelor producer Sarah Gertrude Shapiro, you get the idea that the network finagled more screentime for romance, and Shapiro was forced to co-mingle her ideas for a race-relations-related season with the sometimes-forced human interest stuff. It was probably crucial that Quinn and Rachel be faced with the prospect of longtime companionship. It is also now apparent that that is turning out to be an illusion — and not only because of Quinn and Rachel’s own defensive, cynical, self-devaluing psychologies.

This points to one of the most bizarre things about this episode: Coleman’s turn to romance with Yael, and his willingness to be two-faced to Rachel in order to score his Big Story about Everlasting. Michael Rady’s character has now completed the transition — long and awkward — to being a vehicle for plot points rather than a logical human being. Such is, increasingly, the tradition on the show: Tiffany and Chet’s new and unlikely romance, chalking to her “daddy issues,” is another similarly bewildering shift.

Even Rachel’s nervous breakdown and rape revelation is breezed on past in this episode. It comes up not once, even with Coleman. With all the time Noxon and Shapiro spend setting up the idea that Coleman — despite his off-putting ambitiousness — did, on some level, care about Rachel, we are meant to believe that Rachel’s confession of this fact is something he can just sweep under the carpet.

In other words, the shift to supervillain with Rady’s character is simply, in so many ways, not an effective one. It enhances the overall entropy of the show, and serves as a perfect case study of how it went wrong.

The set of Everlasting… has always had its own bizarre logic and codes, but at this point, its warped causality no longer illustrates anything meaningful about the way damaged human beings work. The shocking plot bullet points drag everything else along behind them. With a police shooting and a casual rape revelation in the mix, the methodology feels nothing short of irresponsible.