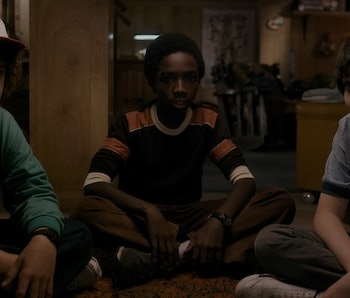 Netflix’s newest hit, Stranger Things, is a treasure trove of 1980s genre references, but what separates it from a fan film that simply makes Steven Spielberg and John Carpenter references is the way it incorporates those nods into the texture of the show itself. These references go deeper than just superficial winks to some of the most iconic books and movies of the decade.

Sure, it’s a nice visual callback, Nancy Wheeler’s outstretched hand from the Upside Down giving us a flashback to Brian De Palma’s adaptation of Stephen King’s Carrie, but more importantly, Matthew Modines sinister government scientist in Stranger Things is in the same vein as the similarly controlling parent played by Piper Laurie in De Palma’s film. And while it’s obvious that the main characters tearing around their suburban neighborhoods on BMX bikes with a supernatural being in tow is a shout at E.T., the truly important aspect they borrow is that Joyce Byers (Winona Ryder ) is the same single mother trying to make ends meet as Dee Wallace’s parent in the Spielberg classic. It’s not just that a group of kids go on a huge adventure like in The Goonies, it’s that the adventure tests and strengthens their friendship in the movie and the Netflix show as well.

There’s so many references going on that fans have collected them into video essays and are still finding new ones after binging the show for a third or fourth time. While there hasn’t been a confirmation of a second season from Netflix just yet, the show’s popularity all but guarantees we’ll see the supernatural exploits of the citizens of Hawkins, Indiana once again. When that happens, here are some other 1980s classics Stranger Things could highlight.

Bizarro Italian horror director Licio Fulci’s terrifying but cheesy The Beyond might seem like the furthest thing from Stranger Things, but that 1981 movie’s portal to hell via a Louisiana hotel conjures enough madness to possibly warrant a nice nod in the second season as the mechanics of the Upside Down, and what comes from it, become clearer.

Cronenberg homages in Stranger Things were a bit more subtle than some of the others, even though there was Eleven making dudes heads explode like Scanners and Will’s undulating bedroom walls like the TV screen from Videodrome. Cronenberg’s 1986 adaptation of The Fly could make for a good correlation to the ways a post-Upside Down Will Byers deals with the effects of coming back from the other side.

Quite possibly the most bonkers art film ever made, Polish director Andrzej Żuławski’s relationship drama that also features a horrific tentacled monster cuts to the heart of human emotions found in a very fantastical story. Stranger Things should match the 1981 movie’s sense of the abrupt absurdity of experiencing supernatural occurrences in your everyday life, and how it changes you forever.

People don’t give James Cameron’s 1989 movie The Abyss, about a deep sea dive team who come into contact with aliens, enough credit. It was a breakthrough in CG effects, but it also relied on the same kind of grounded Spielbergian wonder Ed Harris and Mary Elizabeth Mastrantonio’s characters had towards the movie’s benevolent aliens that works so well in Stranger Things. Maybe not everything in the Upside Down is evil, and the show could use Cameron’s lesser-loved work as a jumping off point.

Not everything has to be disgusting monsters and secret government experiments. One glaring iconic 1980s reference point that Stranger Things most have missed is the high school banter and teen angst in the films of John Hughes. Nancy’s awkward connection to Steve Harrington’s friends, and her ill-fated treatment of Barb, was the closest thing to Hughes’s teen drama formula. Throw them in detention together in Season 2 and it becomes the perfect allusion to one of the decades breakout hits.

5. The Shining / The Dead Zone

If Spielberg is first on the list of Stranger Things forefathers, then author Stephen King is a very close second. References to his work abound throughout the show, including the telekinetic Eleven’s close ties to characters in Carrie and Firestarter. But take those mental gifts one step further with cues from Kings The Shining or The Dead Zone (both of which were published in the 1970s, but whose movie adaptations were released in the 1980s) to complicate the story a bit. Is Eleven called that because she’s the eleventh child to undergo such experiments? What happens if there was other kids out there and they could “speak” to each other? There’s only one way to find out.

Another Hughes classic, but this movie would be better in regards to protagonist friends Mike, Lucas, and Dustin instead of Nancy. Part of what made Stranger Things resonate was the earnest relationship established between the three trying to find their missing buddy. Amplify that dynamic — with Mike as the leader, Dustin as the goofball, and Lucas as the skeptic — with a little bit of Hughes’ acidic dialogue à la Ferris Bueller and it progresses their friendship quite nicely. The Duffer brothers get bonus points if they could add a reference to Abe Froman, the sausage king of Chicago.

It’s safe to say there probably won’t be vampires anywhere in Stranger Things if it gets a second season, but it could take a page out of the Lost Boys playbook. Notably, Joyce Byers seemed content with her two sons as the first season came to an end, not to mention semi-smitten with Chief Hopper, but who’s to say some mysterious new suitor who moves in on Joyce isn’t everything he says he is? This kind of thing would recall the 1987 film’s biggest twist, that Edward Herrmann’s bumbling boyfriend is the real villain behind the supernatural happenings.

2. Back to the Future

Stranger Things happens two years before what is perhaps the biggest cinematic touchstone of the 1980s, so it just missed the mark. Still, if we see a second or even third season of the Netflix show then references to the adventures of Marty McFly will definitely be all over the place. We’re not saying Will Byers needs to go traveling through time, just maybe have him trade in his BMX for a skateboard like Marty’s and have “The Power of Love” playing on the soundtrack. In that case things will be just fine.

Sandwiched in between Carpenter highlights like Big Trouble in Little China and They Live is the horror master’s most underrated film. Prince of Darkness stars Halloween’s Donald Pleasance as a priest who believes that a cylinder of green goo is actually Satan. There has to be some religious folks in Hawkins, Indiana. Once word of the government experiments gets out, who knows what religious fervor this Upside Down stuff might conjure up.