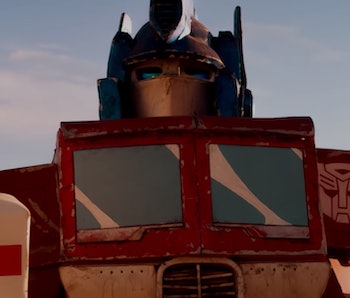 Director Lior Molcho, a crew at the production company Chisel Pixel, and a bunch of dedicated cosplayers got together and, with a little bit of 1980s know-how, created one of the best Transformers films we’ve seen. Generation 1: Hero is like a long lost episode of the animated TV series, except its Autobots vs. Decepticons action is all live action low-budget awesomeness. It’s safe to say the 13-minute film is better than Michael Bay’s bloated Age of Extinction movie, and it even boasts that the story is to be continued.

Inverse reached out to Molcho, who is a music video filmmaker by day, about his obsession with the original cartoon, directing via Skype, and how a chance post by a bunch of cosplayers on Facebook started the whole thing.

Why make a Transformers fan film?

Lior Malcho: I’m a huge fan and I grew up on the cartoons. I just loved the writing and the characters. I hardly ever watch anything that came out after the 1980s. My ringtone is the computer for War Games and I’m wearing a War Games t-shirt right now.

The movie came together because you were inspired after seeing a group of Transformers cosplayers on Facebook. What was that like?

I follow a lot of cosplay Facebook groups and I saw Jay Zarecki’s handmade Bumblebee costume. It clicked for me because it looked exactly like the cartoon. I noticed when Phoenix Comic-Con happened there were like 30 of them that do this called the Arizona Autobots. So I hit them up with the idea for maybe making a movie.

Did the entire production take long?

I basically told them I’d grab my crew and head down to Arizona, but we found out that six months out of the year you can’t really go outside in Arizona because it’s so hot, so we wouldn’t be able to run around filming them punching and kicking. The glue on the suits would probably start to evaporate, so we just had them come to California in the desert.

I came up with the storyline, but we shot everything in one weekend, all night. It took about five months to do post production, which took a crazy amount of work because all the lasers and moving mouths are hand painted.

Were the actors agree to participate immediately?

They were a bit surprised, and there were moments on-set where you could tell they were asking themselves, “What are we doing again?”

What about the voice actors?

It was really collaborative, and everybody was a non-professional actor. They were all just people who found us Facebook and thought they could do a good Optimus Prime voice. We did Skype sessions where I would direct them and they’d record the voiceover to their phones.

Was it easy to find someone who could match Peter Cullen’s iconic Optimus voice?

Marc DuBos is amazing. He actually works in the oil industry, but he saw something that Jay posted on Facebook about us needing voice actors for the movie. We heard from other people and it was only close to the real thing, but Marc sent us an amazing audition that he just recorded on his phone. He just got the energy of Prime from the old cartoons.

Is your 1980s version of Transformers in direct contrast to Michael Bay’s movies?

What did you want to try and recapture from the cartoon?

For me it was simply the characters, and those moments where they always sort of curse at each other saying stuff like, “Lazerbrain!” But there also isn’t one sound effect that wasn’t from the original show. We also wanted the original music too, so we used a library of sound effects from the show that we found online. I also wanted to capture the feel of the video game Fall of Cyberton.

The film ends with a title card that says, “To Be Continued.” What storylines do you want to do in the Generation-1 follow-up?

It’s going to be Bumblebee’s revenge! The Arizona Autobots are actually building a whole bunch of new characters we hope to use too.