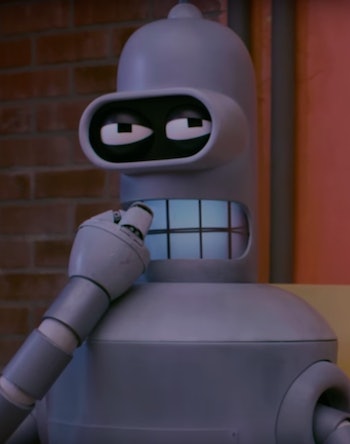 Dan Lanigan knew that he wanted to make a movie, but there were several obstacles in his way. Every filmmaker worries about money, time, and talent — all concerns for Lanigan, whose day job was in reality TV — but he had an even bigger, more fundamental problem: He had no idea what he wanted to make that movie about.

Luckily, he’s got some very goofy — and inspiring — friends.

“I was in San Francisco with my friends Andy Klimczak and Kody Frederick,” Lanigan tells Inverse. “We were talking, waiting in the car for something, and I look at Kody and he’s wearing this red jacket, white shirt, and his hair is up. And I’m like ‘You look kind of like Phillip Fry.’ And he jumps in and does a Fry impression. Andy in the backseat starts doing a Zoidberg. And I went, ‘Ah! I think that’s what we’ve got to do – a Futurama live action fan film.”

It sounded like an absurd idea, turning Matt Groening’s cult sci-fi satire into a real world, in-the-flesh movie — especially on a cut-rate budget with zero outside financiers. Klimczak and Frederick told him as much.

“They were like, ‘Yeah that’s not going to happen; you know how difficult that’s going to be? And it’s going to look like shit,’” Lanigan recalled, laughing. “And I was like, ‘Yeah, not the way we’re going to do it.’

Two years later, the trailer for Fan-O-Rama has hit the internet, with a mix of bemusement, curiosity and genuine fan excitement, generating plenty of media attention and over a million views since July 18.

Though he began his career working for his father’s industrial crane company (Mi-Jack Products is a leader in the field), Lanigan had always loved movies. At first, his passion for cinema manifested itself in collecting rare movie props, which eventually led to the creation of his own company, Cinema Relics. After embarking on a second career as a photographer, Lanigan got into the reality TV game, creating and producing several cable series. He was exec producer on West Texas Investors Club and, more pertinently, Race to the Scene, a gameshow — hosted by Dolph Lundgren! — that worked iconic movie locations and stunts into different team challenges.

Fan-O-Rama marks his initial foray into narrative filmmaking, and as his friends suggested, it was an incredibly ambitious and difficult first step; he was more or less skipping the bunny slopes and heading straight for the double-black diamond.

Given his background in collecting classic movie props, Lanigan was devoted to putting the tangible on screen, and wanted to use as many practical effects as physically and financially feasible. That Futurama is a farce filled with human-animal hybrid creatures, spaceships, and talking heads in jars was no matter; if George Lucas could do it 40 years ago, Lanigan had no doubt they could engineer solutions to the myriad off-beat and surprisingly complex technical challenges presented by such an absurdist premise… and do it on a budget.

“CGI is great, but I feel like there is a quality of life that you have when you shoot a practical prop.”

“I wanted it to have a real feel to it, because CGI is great, but I feel like there is a quality of life that you have when you shoot a practical prop, especially if you have the right textures and stuff that you just brings it all together,” says Lanigan, who was undoubtedly influenced by his dealings with props from sci-fi classics like Alien and Bladerunner.

Lanigan spent six months working on the script, writing alongside Frederick and Klimczak, who also wound up acting in the film — they inspired it with their on-point character impressions, after all. The story is sort of an alternate universe bottle episode, set during the gap between Futurama’s initial cancellation and later cable revival; Lanigan uses 2004 as a cutoff for the film’s obligation to continuity and canon.

With the story squared away, the real challenge began. Set 1,000 years in the future, the show was freed from any technological limitations, and took advantage of it at every turn; disembodied heads preserved in jars were active speaking characters, spaceships crowded the sky; and humans were far from the only advanced species roaming the earth (and many other planets).

It’s the sort of story that would seem to demand a high budget, especially given Lanigan’s pledge to not make a fan film that looked like shit. But instead of launching a Kickstarter — which likely wouldn’t sit well with the copyright holders — or seek collector funding, Lanigan called in favors and friends from his other life as a movie prop director. As the project went from the initial plan of a small series of web videos, to something much bigger, the level of detail and commitment from his collaborators mushroomed as well.

Unlike most fan film directors, Lanigan had the benefit of working with some major players in the industry, including Oscar-winner Martin Meunier (Starship Troopers). On display at their booth at Comic-Con were a number of the props and costumes used in the film. Even a close-up look at the items belies just how complicated they were to make and operate.

Zoidberg, the lobster scientist in the show, was played by Klimzek, who wore a fat suit and a very complicated costume made of individual sculpted elements and animatronics. The robotic parts — important for his face, especially — were designed by Spectral Motion, an industry leader that has worked on Marvel films, Netflix’s Stranger Things, and Universal Studios’ new The Walking Dead attraction.

Bender, the wise-ass robot, was even more of a challenge, because the size and shape of the character prohibited having a human actor operate from inside. Instead, he’s both an animatronic and puppeteered, with internals also built by Spectral Motion. The head, eyes, eyelids, mouth, and neck — the small, intricate parts, really — were manipulated via remote control. The big body parts — the arms, legs, and torso were puppeteered.

Even the human characters required a lot of effort and craftwork — the actress playing the one-eyed heroine Leela spent four hours every morning having makeup — including prosthetics and a half-wig — and an advanced device strapped to her face.

The futuristic cities and airships, meanwhile were all built as scale miniatures, some of which were taken from their full-sized soundstage and put on display at Comic-Con (they also had a few location shoots and green screens; this was not a single-location project). Those miniatures, too, represented a significant investment — which, legally, cannot be directly recouped.

Lanigan’s film violates all sorts of copyright laws, as Futurama only ended three years ago, and is thus nowhere near the public domain. The rights to the show are owned by Groening’s The Curiosity Company and 20th Century Fox, and the filmmakers behind Fan-O-Rama didn’t exactly ask them for permission to use their characters.

The caveat: The film, which will be released sometime this fall, will live only on YouTube, and will be accessible for free, without ads, which Lanigan hopes discourages any potential lawsuits or takedown requests. That hope is complicated by the fact that a court ruled against Star Trek fan filmmakers, restricting their right to use copyrighted material, but that case came long after the production on Fan-O-Rama kicked off.

“This is completely a fan-based project,” Lanigan says. “Its a ‘go out there, check it out, enjoy it, hope you like it’ thing, and [will hopefully] bring something extra to the Futurama world.

“Because it’s no longer on the air, hopefully we can keep Futurama alive and maybe it will come back as a cartoon at some point.”