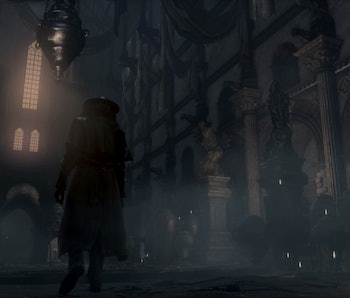 Instead of the passive, behind-the-shield focus of Dark Souls, 2015’s Bloodborne works to encourage aggression in the best ways. You regain lost health when you strike back immediately, you’re rewarded for consistently punishing a boss, and, more importantly, you can outmaneuver bosses with enough practice — making them become prey provided you properly time your attacks. This approach makes Bloodborne feel like the better game when it came to combat, a status it retains despite the recent release of Dark Souls 3.

There’s plenty to love in Dark Souls 3, but despite all of that theres something inherent about the game’s approach to combat that’s ultimately uninteresting. Dark Souls 3 encouraged me to focus on backstabs and wait for openings in combat against the various bosses scattered throughout, but without those openings? I couldn’t truly take advantage of a boss — even if I knew exactly what they’d do and when. The game never truly let me use my knowledge to become an absolute badass in boss encounters (which is something Bloodborne nails), and it’s worse because of it.

Boss encounters in Bloodborne come across as more active and focused on player skill, opting to push timing and knowledge of each encounter to the forefront of the game’s combat instead of encouraging overpowered builds and backstabbing continuously. Nearly every boss in Bloodborne revolves around a stagger mechanic, where players can hammer into specific parts of the boss in order to drop their health tremendous amounts and perform stronger attacks. By learning each of these weak points, you can systematically eliminate almost every boss in the game without a scratch provided your skill level is on par with them.

What’s even more interesting is how Bloodborne’s combat system allows even lower level players to take advantage of the stagger mechanic and absolutely demolish bosses despite their smaller health, stamina, and damage capabilities. Take Vicar Amelia for example, who is one of the earlier bosses in the game. Even at level 4, you can systematically work your way around her weak points to perform multiple visceral attacks to bring her from 100% down to zero with one combination attack.

These sort of combinations work to keep you invested in your character as well, especially when it comes to grinding through new game plus and the chalice dungeons offered in the game. Instead of working on new builds or further increasing attributes to build a better character (which is certainly an option), the true driving motivation behind Bloodborne feels like increasing your skill cap as you work through the same bosses and learn their moves.

Every dodge, every swing, and every ounce of damage you deal in Bloodborne is a basic lesson that you’re improving. Sure, the same principle exists within Dark Souls, but it’s not on the same level as Bloodborne — which is why folks should revisit it if Dark Souls 3 didn’t sate their appetite.

More like this
Gaming
Jan. 26, 2023
Hi-Fi Rush reveals a surprising strength of Xbox Game Pass
By Willa Rowe
Gaming
Jan. 25, 2023
Fire Emblem Engage needs to let its characters out of the closet
By Robin Bea
Gaming
Jan. 23, 2023
Everyone your main character can romance in Persona 4 Golden
By Hayes Madsen
LEARN SOMETHING NEW EVERY DAY.
Share: