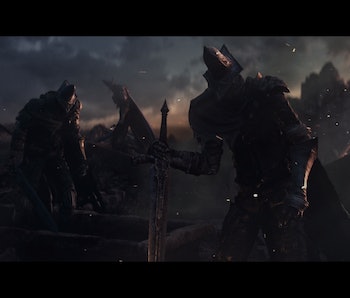 I remember when I first decided to pick up Dark Souls on my Xbox 360 in 2011. I spent days contemplating whether or not I should suffer through one of the most difficult games ever made, and when I finally decided to make the leap, it was absolute hell. I died continuously at the hands of regular enemies, bosses and even to the environment as I rolled off of bridges to my death. But, despite the trouble and despite screaming at my television, I kept at it for weeks, working to improve myself. Eventually, I learned how I should develop my character in order to complete the game, and when I finally took down the final boss I felt an overwhelming sense of success that few games have ever given me.

Dark Souls is a franchise designed to kill you from the beginning. It presents difficult encounters, overpowered bosses and tough environmental challenges for you to navigate. Thankfully, Dark Souls 3 stays true to that formula while providing an easier barrier to entry for new players.

Like Dark Souls and Dark Souls 2, Dark Souls 3 takes place during the end of a cycle where the player character must fight to stop the oncoming apocalypse due to the battle between Light and Dark. This time, however, the only way to stop this apocalypse is to destroy the Lords of Cinder and bring them back to their thrones.

Dark Souls 3 is filled to the brim with large lore implications, touching on some of the biggest mysteries of the franchise that the community has been trying to hammer out over the last five years. Throughout your play-through you’ll witness nods to characters such as Artorias the Abysswalker, Solaire of Astora and even one of the original people who defeated the dragons at the beginning of the world, The Witch of Izalith. Spotting those references is one of the most enthralling experiences available in the franchise so far.

Naturally though, these secrets come at a heavy cost. Most are hidden behind complex puzzles of enemies, jumping and invisible walls that require a keen eye (or a dedicated wiki) to figure out. Even then, they’re protected by difficult enemies who you’ll have to suffer through in order to get at the rewards behind the door. But if lore isn’t your thing, these areas are covered in rare items for you to enjoy.

From a gameplay standpoint, Dark Souls 3 is much of the same compared to previous installments in the franchise. You’ll be hacking, slashing and blocking your way through every area while maintaining your health and stamina. One thing I noticed during my 40 hours with the game is that Dark Souls 3 feels a little more like Bloodborne than its predecessors. That’s great to see. Previously, the franchise seemed to reward a more defensive playstyle and required almost every player to carry around a shield, but Dark Souls 3 seems to reward you for playing aggressively in certain situations.

Take the Abyss Watchers boss fight for example, where I found that locking them down with heavy blows was the key to success instead of sitting behind my shield and waiting for the right moment to strike.

One of the most drastic changes in Dark Souls 3 was the introduction of FP to the game. This new system allows spells to be cast from a mana bar instead of being limited to a specific number of uses. Instead you’ll have to allocate your Estus uses into a new flask called the Ashen Estus Flask, which will restore your FP upon consuming a use of it. Thanks to the new system I’ve seen a significantly larger amount of magic-focused player characters throughout Dark Souls 3 which is a welcome change of pace for the community.

Even if you aren’t a mage though, the new FP system allows you to perform special attacks with your weapons. Known as weapon arts, these movesets are tied to specific classes of weapons and allow you to consume FP in order to perform some pretty crazy attacks that were previously reserved for the game’s bosses and A.I. enemies. While some are certainly more beneficial than others, the option is always a nice fallback if you’re caught in a tight situation.

As we all know, Dark Souls 3 wouldn’t be a proper game in the franchise without large-scale, epic boss fights for players to labor through with their characters. This time around bosses are awe-inspiring encounters accompanied by beautifully dark atmospheres and ominous soundtracks that really work to get your blood pumping for the fight. Every boss encounter has a unique feel to it too, whether it be the location it takes place or the music that fills your head while you fight – which serves to keep the game fresh and interesting while you play though.

More importantly though, Dark Souls 3’s boss fights are extremely difficult to master without multiple attempts in order to learn their attack patterns. Every fight features at least two separate phases that are activated by different cues which can sometimes change the entire moveset of a boss. Not only does this force you to learn a new sets of attacks, but works to keep you at a disadvantage since nearly every boss in the game can kill you in two or three hits during their second phase.

Covenants make a return in Dark Souls 3 as well, with previous favorites like The Warriors of Sunlight and Blue Sentinels among their ranks. The nice thing about covenants this time around is that each is attached to a specific item you can equip to declare alliance to them, making it easy to swap on the fly and gain ranking with whichever you please. Just like in Bloodborne many of Dark Souls 3’s covenants are available in the beginning of the game by picking up these items which encourages players to become involved with their faction of choice much earlier. It’s a welcome change of pace, although I’ll admit it did encourage me to grind out faction rewards much earlier than I typically would. It’s also important to note that a few of these covenants are extremely well hidden. Just make sure to explore every nook and cranny you come across.

Dark Souls 3 is an incredibly rewarding package that improves upon every aspect of the franchise formula – adding long-awaited changes like the FP system, weapon arts and easy-to-change covenant affiliations. Each of these additions helps to bring the franchise forward as whole by taking community feedback and thrusting it directly into the mechanics behind the game itself. As a lore-buff myself, it’s also fantastic to see so many ties to previous characters and stories within the Dark Souls franchise that flesh out questions the community has sought to answer since the beginning. As expected though, there’s plenty of secrets left to uncover and lore implications to speculate on that will keep me playing through the game multiple times over the next few months.

If Dark Souls 3 truly is the last entry in the franchise as people claim, then it’s one hell of a product that culminates everything From Software has learned in the last 5 years. Even if you’re not a veteran or fan of the franchise – it may be worth a purchase. Dark Souls 3 is a game that forces you to learn from your mistakes, pulls you into its deep atmosphere and then gives you an overly rewarding sense of success once you finally understand the way it works.