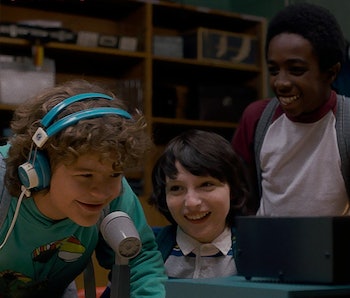 Netflix’s newest original series, Stanger Things, feels like it truly exists in the ‘80s. It’s beautiful, weird, and haunting. The clothes, the hair, the tech, the cars, and the home decor are spot-on and immediately transport us back to some of our favorite ‘80s films like The Goonies and E.T.. But, one of the elements that’s most vital to transporting us back in time is the music.

The sweeping and chillingly synthy score does the bulk of the work, but the careful curation of tracks that are very of-the-time are what place us in the world of the show and truly makes it come alive.

Netflix put together a playlist of the songs used in Stranger Things on Spotify and it got us thinking about all of the other quintessentially ‘80s jams that go hand-in-hand with the show’s selections. Since the ‘80s were the golden age of mixtapes, we’ve put together one of our own — something of a Stranger Things extended cut of some songs that embody the ‘80s (and some of the ‘70s too).

“All Through The Night” - Cyndi Lauper

The new Netflix show has moments of major Goonies vibes, and Cyndi Lauper’s an inextricable part of the sonic signature of that classic movie. “All Through The Night” has a very different vibe, but feels like a good fit in the eclectic bunch of Stranger Things tracks.

“Hold Me Now” is one of those songs that everybody knows on some level, even if they don’t know it. We’ve all heard it, whether in another movie or TV show, over the loudspeaker in Bed Bath & Beyond, or at a wedding where somebody really cut corners on the DJ. It’s one of the essential parts of the ‘80s fingerprint.

It’s not an ‘80s mix without The Cure. “Just Like Heaven” was, admittedly, released pretty late in the decade and likely cuts it close with regards to fitting in the Stranger Things timeline, but since we’re unconstrained by budget and time, we’re including it.

“Take On Me” is another song that’s so deeply embedded into the cultural consciousness surrounding the ‘80s that it felt wrong not to include it. Norwegian group a-ha made a big impact with this track and the accompanying video, which was nominated for MTV’s Video of the Year award in 1985.

There’s not a person on Earth that doesn’t know this song. It just radiates ‘80s goodness, and ‘80s youth in particular. “So many adventures could happen today.” Sing it, Alphaville.

There are two Elton John tracks on the mixtape: “Rocket Man” and “Captain Fantastic and the Brown Dirt Cowboy.” While normally two tracks by the same artist on one playlist would be a no-no, this is Elton John and it just feels right.

Find these and the rest of the mixtape playlist here: