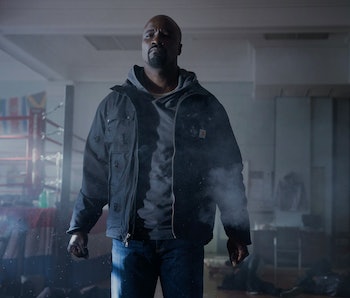 Marvel Studios is going all in with Luke Cage at San Diego Comic Con, and it’s about damn time. The Netflix series stars Mike Colter, reprising his role from last year’s Jessica Jones. It’s set to air in September on the VOD service, and the panel Thursday night began with a nifty hype trailer that got fans excited — until Jon Bernthal from Daredevil walked on stage, confirmed that Netflix’s Punisher series is in motion, generating even more hype.

Bernthal’s presence was brief – just a teaser of punishment to come. He soon exited as Colter and the rest of the show’s cast — Simone Missick as Misty Knight, Theo Rossi as Shades, Alfre Woodard as Black Mariah, Frank Whaley as Detective Scarfe, Mahershala Ali as antagonist Cottonmouth — and showrunner Cheo Choker took stage for a Q&A. The panel was moderated by Marvel writer Jeph Loeb, who added that there are no villains, only the “other hero of the story.”

Rosario Dawson, who plays nurse Claire Temple in Daredevil and Jessica Jones, is also confirmed to appear in Luke Cage, but was absent from Comic-Con because she was shooting “something else for Marvel and Netflix.”

The footage was an extension of what was attached to the end of Jessica Jones, with Luke Cage looking for gun runners on Cottonmouth’s orders. Following the clip, with bullets bouncing off Cage’s impenetrable skin, Coker said “the world is ready for a bulletproof black man.”

Other reveals said Harlem’s unique history in New York is the “unbilled character” of Luke Cage and that its presence matters deeply to the series. Coker went on to talk about the show’s music, which Coker called the “Wu-Tangification of the Marvel Universe.” Every episode is named after a popular hip-hop song. “I wanted the series to feel like an album,” Comer said. “When a Prince record came out, or some big record came out in the old days, we shut down everything and listened to it. The only time we do that now is binge-watching.”

The rest of panel spotlighted the supporting cast, including Shades, who Loeb described as looking “at the world as a chessboard” much like Littlefinger in Game of Thrones. Misty Knight, meanwhile, is “no one’s sidekick” and is introduced in the show working undercover. Loeb said that as soon as Missick auditioned for the role, no one else was considered.

More clips followed, featuring a confrontation between Woodard’s Black Mariah and Cottonmouth, two popular antagonists from the Luke Cage comics who appear in the series. “From day one it’s been an exploration to find the truth from his point of view,” said Ali, who plays Cottonmouth. Loeb went on to add that Cottonmouth will further the Marvel/Netflix tradition of memorable foils like Vincent D’Onofrio’s Wilson Fisk in Daredevil and David Tennant’s Kilgrave in Jessica Jones. Another scene had Cottonmouth in front of a mural of Biggie Smalls wearing a crown, delivering a long soliloquy. Coker, who was a personal friend of Biggie, said that Biggie’s ability as a storyteller helped shaped Luke Cage and his interpretation of Cottonmouth.

And finally, there’s a trailer, which won’t premiere until sometime after the panel, or even after Comic-Con. But it was set to actual music from Wu-Tang Clan, so they really weren’t joking about Luke Cage being the Wu-Tangification of the iconic comic book brand. By any account, Luke Cage ain’t nothin’ to fuck with.