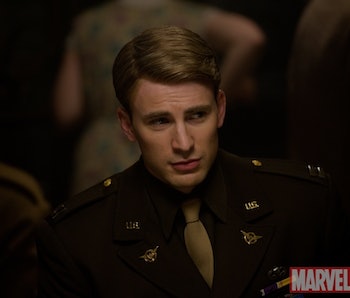 Our political climate is bizarre.

It’s an election year of buzzwords — “email,” “Benghazi,” “great,” “again,” — thrown around in the political ring the way that words like “optimization” and “engagement” are floated over conference tables. It’s also a year of incoherent mumbling, babbling, and shouting, and like most election years, it exposes the deep cracks in our political structure and system. But in truth, 2016 feels like less of an election year and more like a political circus held in tent surrounded by the Horsemen of Apocalypse.

In this political hellscape – marked by troubling rhetoric and an uncomfortably close look at the deep divide that exists among Americans on issues that most thought long-resolved – we’ve seen the swift and complete obliteration of the myth of “middle ground.” And so, naturally, we wondered exactly where one of the most iconic heroes in American history might stand in this troubling election year. We spoke to Professor J. Richard Stevens, author of Captain America, Masculinity, and Violence: The Evolution of a National Icon to determine where Cap’s ideals and history might put him in the current political spectrum. Mostly, we were looking for the answer to the big question: Would Cap vote for Hillary Clinton or Donald Trump?

Turns out the answer to that question is pretty straightforward.

Having studied the history of the character and the many changes in that character and in his stories, Stevens is pretty clear: “There’s really no version of Captain America in mainstream continuity that I can find that would back Donald Trump.”

What about Hydra Cap? Stevens says that even Cap’s new storyline displays a social point of view at odds with Trump’s campaign — oh, and that’s over anyway.

Make no mistake, though: Captain America has to vote. It’s an American ideal that’s inextricably connected to his identity as a symbol of the United States. There’s no way he’s abstaining from the vote.

“I think the question in this case is whether he would hold his nose and vote for Hillary Clinton,” says Stevens, “or whether he would feel that she’s been misrepresented or mistreated and so he feels obligated to try to support her that way.”

Stevens points out that Captain America and many of his superhero friends are no stranger to being misrepresented or misunderstood by the media and the public. There’s a chance that Captain America’s experience with the complicated politics of image might give him a degree of clarity or sympathy when it comes to Hillary Clinton. Stevens says he might feel as though she’s “getting a raw deal” herself.

“He’s been through many instances in his own career and with his friends where they’re misrepresented in the public eye,” says Stevens. “I mean, superheroes, that’s part of what they deal with.”

Stevens notes that there are several reasons why Captain America wouldn’t back Donald Trump, from the character’s historic tension with the Republican establishment (a compelling example appears in the issues that tackle Watergate and the comic version of Nixon, who turns out to be a criminal overlord) to his identity as a child of immigrant parents, which often informs his approach to politics – particularly, Stevens says, “when he’s hearing somebody espouse a conservative, protectionist or even overtly white view.”

This isn’t necessarily new for Captain America, though. Throughout the history of the character, there are many instances where he doesn’t agree with the administration and is uncomfortable with the political structure. Stevens points to a 1986 issue of Captain America (#322), written by Mark Gruenwald, in which Captain America says:

“I’m not a knee-jerk patriot, I don’t believe in my country right or wrong. I support America in its concept, its essence, its ideal. Its political system, foreign and domestic policy, its vast book of laws — I’m not America’s official advocate of any of that. What I represent are the principles that America’s politics, laws and policies are based upon…freedom, justice, equality, opportunity.”

So where do we find the formation of Captain America’s political ideals? What else informs his political viewpoint?

Captain America’s story started in the shadow of World War II and that remains a central part of his character. The history of Cap and global conflict from which he came has always been the source of his evolving ideas of freedom, justice, equality and opportunity — ever the pillars of Captain Americas set of ideals.

It’s worth noting that while we often view and talk about Captain America within a single continuity, some of the changes we see in the character result from fact changes in the writing staff. Often. Those writers bring new aspects to the character and push his ideals and views in new directions.

“When you look at the 1940s — the original Simon and Kirby stories that were told during the war — you have this very pro-military and rather violent character, but even in that context, there’s this presumption that the U.S. is a force for good and the reason why we’re in this conflict is because there’s evil in the world,” says Stevens.

“It’s also important to note that his creators were Jewish, just like most of the heroes that we have classically,” says Stevens, “so the anti-Hitler approach frames his sense of justice because of what Hitler is doing in the world that makes this character have this kind of in-born sense of justice that comes to represent what we think of as the nation.”

As the character progressed and politics changed, the tension between Cap’s ideals and the reality of America’s political system intensified.

“[T]here’s this kind of continuum where he’s constantly struggling to fit his ideals into the political structure,” says Stevens. “Most commonly what you hear over and over in different eras is him saying, ‘I don’t identify with the political establishment, I believe in freedom and equality and all of these ideals that set up law and government and politics.’”

Captain America’s views aren’t totally static, though. Particularly in the 1970s, we see Captain America come face to face with racial inequality, and it challenges his perspective and his understanding of the how our political structure interacts with the people it’s ostensibly meant to serve.

“He has to try and reconcile how minorities are being treated in this system that he kind of presumed was good and had to make some adjustments in his views,” says Stevens.

Ballot box decisions aside, what would Captain America think of America right now? Stevens makes it clear that he’d likely be disappointed by our current political climate, and that one of his biggest problems with this election year would probably have to do with the distortion of messages and the way in which they’re used to create cracks and divides among the American people.

“I think this particular climate would disturb him more than some in the past, and I think it is because of those core concepts: freedom, justice, equality, opportunity,” says Stevens. “Embedded in that is kind of a truth and honesty component, and I think he would react very strongly to how distorted the politics and conversations are right now.”

So there you have it: Captain America’s voting for Hillary Clinton come November, whether he feels great about it or not. In truth, he’s never been a proponent of political administrations, and that’s unlikely to change. Because at the end of the day, Captain America isn’t a symbol of politics or policies, but of freedom, justice, equality, and opportunity.

More like this
Entertainment
6.24.2022 11:15 AM
Behind the scenes at “Herogasm,” The Boys’ most NSFW episode ever
By Aaron Pruner and Jake Kleinman
Entertainment
6.23.2022 4:42 PM
Obi-Wan Kenobi Easter egg gives the show’s best scene a deeper meaning
By Dais Johnston
Entertainment
6.30.2022 7:00 AM
The Boys Season 3 Episode 7 release date, time, plot, cast, and trailer for the Amazon show
By Jeff Spry
Related Tags
Share: