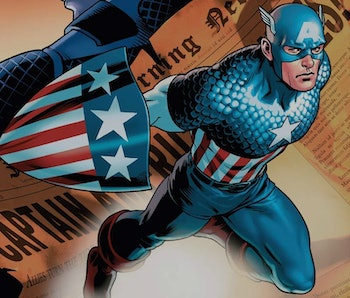 Very recently, the entire comic book fan community collectively lost their minds. In the new ongoing “real” Marvel Comics Continuity, Steve Rogers (AKA Captain America) was revealed to have secretly been a Hydra Agent all along.

This sent massive shockwaves through not only niche news outlets covering “geeky” interests, but also mainstream, regular news outlets, too. Marvel executive editor Tom Brevoort spoke to USA Today extensively about how “real” this revelation was, and how it created a “wrinkle” in the character’s long-standing good-guy history. But now, after barely a month, it’s all been undone. Captain America was never a Hydra agent, actually guys, Marvel was just kidding.

As revealed in the direct-follow-up to the previous issue, this new evil backstory was actually just invented by the Red Skull, using the magic of the cosmic cube.(Which now is part of the body of young girl named Kobik.)

Basically, the whole thing is a massive back-peddle cop-out, and seems to be Marvel’s version of IRL comic book click bait. If the idea of Cap secretly being a Hydra (read: NAZI!) agent was going to be flipped this quickly, then why did executive editor Brevoort go out of his way to assure the press that this story was legit?

Many critics and fans have hammered on the point that big reveals and flips in the comic book world are common, and as such, no one should really get upset about stuff like this. Superman died and came back. Robin was murdered by the fans in the 80’s through a call-in-phone survey. All of this amounts to various publicity stunts that comic book writers need in order to sell their comic books. A crazy cliffhanger is always exciting, so what’s the big deal?

Well, this was a little different. Because the actual inception of Captain America was designed as an anti-Nazi message in a time BEFORE the United States was actually involved in WWII, the character has come to represent as kind of stand-in for the opposite of Nazism. Having him align with the Marvel’s version of the Nazis (Hydra) made a lot of people really angry because this felt less like a cool cliffhanger, and more like using anti-Semitism to sell comic books.

This was compounded by the fact that in order to drum-up interest in this storyline, Brevoort felt it necessary to make all of this “official.” If the cliffhanger had dropped without mainstream news coverage, some of the controversy could have been avoided. And now that everything has been effectively reversed, the stunt seems doubly insulting.

It’s unclear if this cosmic-cube explanation for Cap being bad was planned all along, or if this turn is a direct reaction to the controversy caused by the previous issue. In either case, if Marvel Comics is smart, they’ll keep their mouths shut and let the actual writing speak for itself.