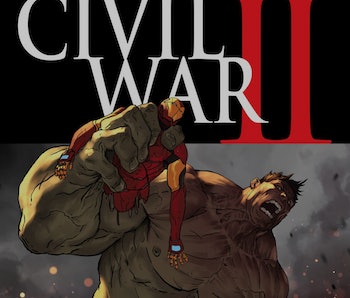 So far, Marvel’s big Civil War II comic event has killed off James Rhode’s War Machine, and Jennifer Walters a.k.a. She-Hulk. Now, in the third issue of the eight-part series, Marvel is keen on tearing down its old order by keeping the death count steady. Not only does Bruce Banner’s Hulk meet his end in this issue, but his death may have also put an end to the superhero career of his murderer, Clint Barton/Hawkeye.

Marvel’s second Civil War centers around the Inhuman named Ulysses. His power allows him to have visions of the future that are inevitable, unless stopped. The vision this time? Bruce Banner’s Hulk will kill nearly every important hero unless prevented from doing so.

What’s weird is that the current Hulk isn’t Bruce Banner, but Amadeus Cho. In fact, Banner has been free of the Hulk for some time in-universe, so the fear that he would Hulk out again is a little perplexing. Still, Ulysses’s vision foretells a Banner Hulk murder spree, and nearly every superhero team comes to Banner’s secret lab to make sure the vision doesn’t come true.

Turns out, however, Banner had his own contingency plan in case he ever did transform into the Hulk. Prior to the whole superhero squad coming down to take him in, he secretly met with Clint Barton to make sure that if Banner turned back into the Hulk, Hawkeye would be the one to take him down using one of Banner’s secret Hulk-busting arrows. Which leads us to the central event of Civil War II issue three, the trial of Clint Barton for the murder of Bruce Banner.

What’s weird about the issue, and what lends itself well to the central conflict between the two civil war armies, is that Banner really did free himself of the Hulk. He apparently has been experimenting on himself to make sure he stayed that way, but nobody would listen. Instead Team Danvers and Team Stark kept debating over the future and as a result Banner’s rage surfaced, Barton saw a bit of the Hulk, and the rest is history.

I like how the sheer uncertainty of whether or not Banner really was going to turn into the Hulk during the tense standoff lends weight to the debate surrounding Ulysses’s powers. I’m not a fan, however, of how each time there is a debate, the writers are satisfied with giving readers another dead body and using that as an argumentative point.

I think there are some genuinely interesting arguments surrounding the topic of predicative justice, but Civil War II is mostly interested in having heroes kill each other. The issue might end with a cliffhanger of whether or not Barton is guilty of Banner’s murder, but I have a feeling that Civil War II is just getting started when it comes to killing more heroes.