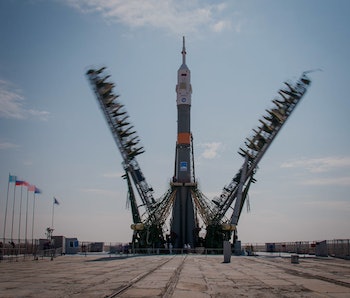 A brand new Soyuz MS-01 spacecraft completed its journey to the International Space Station on Saturday morning. The spacecraft safely delivered three new crew members to the space station who will join three more already working there. NASA confirmed the spacecraft’s “textbook docking” at 12:06 a.m. Eastern time after a flawless mission to the ISS. The spacecraft docked roughly six minutes before its expected arrival.

Astronaut Kate Rubins, Russian cosmonaut Anatoly Ivanishin, and Japanese scientist Takuya Onishi are shceduled to work on roughly 40 experiments during their four-month stay at the space station, which is currently running under the watchful eye of NASA’s Jeff Williams.

As the three-person crew made their way toward the space station, the trio already on the ISS — which includes Flight Engineers Oleg Skripochka and Alexey Ovchinin — have been keeping up on other operations in the meantime.

Over the next few months, the ISS will be home to a series of new experiments that will lend perspective toward a possible future life in space. The astronauts will also be responsible for installing new docking technology, with the help of SpaceX’s CS-9, that will act as something of a universal plug for commercial ships that need to dock and several others. Yesterday, it was reported that astronaut Jeff Williams installed gear in the Japanese Kibo lab module specifically for this particular job.

The whole process will take roughly another two hours from the time of this writing, when the hatch on the Soyuz spacecraft officially opens at 2:30 a.m. Eastern. The opening will unite all six ISS crew members for the first time, and work is practically already underway for the new arrivals. Much like the crew’s arrival, the docking will be streamed live with updates and info from both NASA and Soyuz officials over the course of the broadcast.

More like this
Science
6.27.2022 8:15 PM
NASA mission to an ancient mini-planet in our Solar System suffers major setback
By Doris Elín Urrutia
Science
7.3.2022 1:30 PM
NASA move could help the International Space Station stay in orbit without Russia
By Nancy Atkinson and Universe Today
Science
6.27.2022 12:00 AM
NASA lit 1,500 fires on the International Space Station — and discovered something new
By LAURENCE TOGNETTI and Universe Today
Related Tags
Share: