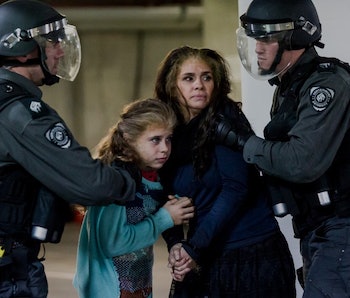 Last Wednesday, many of us watched in grief and horror at the news of another black man killed by a police officer. On that day, the Australian sci-fi show Cleverman aired a brilliant, but violent, finale that included a scene of a young man being publicly shot dead by law enforcement.

Cleverman is written by, and primarily for, Australian Aboriginal people; creator Ryan Griffen didn’t write Cleverman for Americans, or white people. He certainly didn’t know that scene would air in the U.S. on a day of outrage surrounding Alton Sterling’s death at the hands of police, only a few hours before Philando Castile was also killed. But it happened, and it drove home the idea I’d gotten from the show all along: that by not intending to resonate with the American cultural context, it did so even more powerfully. So how does that work?

Egyptian writer Alaa Al Aswany says, “Literature is not a tool of judgment — it’s a tool for human understanding.” Psychologists and neurologists are still unraveling the questions of how empathy is developed, but there is strong evidence that fiction can enhance empathetic ability, both in children and adults. When compelling fiction allows you to imagine yourself in the character’s place, your brain is exercising those same neural pathways that allow you to empathize with another human. There’s even evidence that a good story has a tangible and lingering effect on brain activity.

The same type of research has not been applied to other media such as movies or television. Could we expect these forms of media to also ramp up our development of empathy? On the one hand, they still represent fictional narratives, with characters we are meant to relate to. On the other hand, studies emphasize that it was literary fiction that affected empathy, while genre or popular fiction had no effect. Researchers attribute this to the use of tropes and formulas in popular fiction that are so familiar, they do not push the brain to do any substantial work.

Literary fiction, on the other hand, “focuses more on the psychology of characters and their relationships. This genre prompts the reader to imagine the characters introspective dialogues. This psychological awareness carries over into the real world, which is full of complicated individuals whose inner lives are usually difficult to fathom. Although literary fiction tends to be more realistic than popular fiction, the characters disrupt reader expectations, undermining prejudices and stereotypes.”

The key, it seems, lies in forcing the brain into uncomfortable territory, requiring it to fill in the gaps. For most of its history, television was purely formulaic: the comforting rhythms of neat episodic storytelling meant to comfort the viewer and prepare them for a commercial break. We have, of course, seen a tremendous rise of more nuanced, varied, and quality storytelling, taking on long form narratives and building more complicated stories and characters. This new era of television brings us closer to an on-screen equivalent of literary fiction.

By nature, watching visual media requires less imagination; the appearance of characters and scenes are visualized for you. Therefore, in order to get an emotional exercise, viewers must seek media that creates gaps of unfamiliarity in other ways.

The best way to do this, then, is to find stories about characters who are categorically unlike you — whether in race, nationality, religion, gender, sexuality, or socioeconomic background — created by writers who are also unlike you. Having more diversity on screen is great, but it still doesn’t do enough when those characters are written from the same perspective we are so used to seeing. It’s why the new Iron Man and Luke Cage seem great, until you realize they are still being written by white creators.

Diversity is often treated a niche genre; women, LGBTQ, and African-American are all subcategories of literature while books by white males get to be just “literature.” This means women and people of color grow up reading and watching and relating to characters who are different from them, while white boys are not exposed to the same amount of emotional work from fiction.

The benefits of watching different series and movies doesn’t just apply to issues of race or gender. Media from other countries and cultures can have the same effect. International media is more available than ever before, from TV to comics to literature and personal writing. Even if these stories adhere to genre, or utilize familiar tropes, they still nudge the imagination into gear through their slight foreignness.

I don’t know what it felt like to watch that scene in Cleverman as an Australian, in a country with a fraction of the gun violence, or to watch it as a black person. But the emotional impact of seeing it is stretched and shaped by considering these perspectives. This entirely common image of violence in television is made uncanny — just off-center of the familiar — by its context. A trope can be made just unfamiliar enough, when it is written and portrayed by and for someone else, that it becomes an exercise in empathy rather than entertainment to dull the senses. Every reader and viewer benefits from seeking diverse stories told by diverse storytellers. It’s not a niche, and it might just make you a better person.