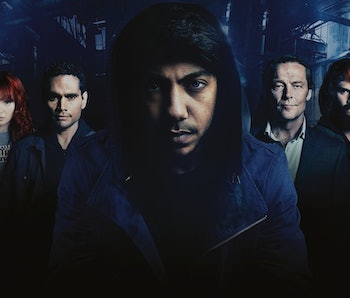 Cleverman is a sci-fi show out of Australia being billed as the first Aboriginal superhero story, but Koen (Hunter Page-Lochard) is anything but super in the premiere episode. In fact, he’s the most detestable guy in the room.

The series is set in a dystopic near-future but the characters come from ages old Aboriginal legends. Creator Ryan J Griffen developed the story for his young son. As he explained to The Guardian, “We were playing Ninja Turtles, and in that moment I suddenly wished we had something cultural – something Aboriginal – that he could cling to with as much excitement as he did with this.” Five years later, Cleverman is here, it’s innovative, and it’s gripping.

Iain Glen (Ser Jorah of Game of Thrones) may be the only face you recognize, playing a powerful TV magnate with a special interest in the Hairies. But the cast also includes Australian film legends like Jack Charles and Deborah Mailman and is made up of 80% Aboriginal actors. Rapper Briggs appears and provides some of the soundtrack, in a show that is gritty and urban despite its spiritual roots.

The setting is a city divided between humans and ‘subhumans’, an ancient race known as the Hairypeople, abused and marginalized by the government and forced to live in a squalor in ‘the Zone’. The allegory on xenophobia is not subtle, but it resonates. The Australian media has been calling it a very Australian political drama but there are echoes with conflicts happening everywhere, particularly the ongoing refugee and immigration crises.

It’s a story that feels urgent, and very real. The futuristic aspect is glimpsed only briefly, in the flick of a digital book page or the flash of a high speed train in the back. Most of the action takes place in the derelict Zone, where public brawls serve as conflict resolution. The characters are compelling, particularly Waruu, a upstanding community leader, played with simmering, barely balanced rage by Rob Collins. Overall, Cleverman is wonderfully made and acted.

The episode opens with this brief explainer of the mythology behind Cleverman:

“The Dreaming is the spiritual realm that binds the past, present and future together. It is inhabited by incredible creatures and spirits. At the head of this realm is the Cleverman, a powerful man who is the conduit between The Dreaming and the real world.”

There’s another conflict brewing, between all around shitheel Koen and his older brother Waruu. While Waruu keeps an uneasy peace between humans and Hairies living in the Zone, Koen makes a living smuggling Hairies out then turning them over to authorities. Yes, Koen has a long, long arc to go to become a superhero. Yet tottering Uncle Jimmy (Jack Charles) passes the role of Cleverman on to him.

“I did a bad thing,” are some of his final words to Waruu, before he summons and is ripped apart by a mythical monster.

The sci-fi tropes may seem well-trodden but we think there is a whole lot more to come from this show. It’s exciting to see such a rich culture tapped, properly, with pathos and ethos, that we as a foreign audience can appreciate. The threat of the Namorrodor is already a creepy supernatural twist that was not in any of the preview material. The excellent performances and filmmaking along are enough to merit a watch.

Cleverman is airing simultaneous in Australia, the US, and the UK, and has already been picked up for a second season. It airs in the US on Wednesdays at 10pm on Sundance TV.