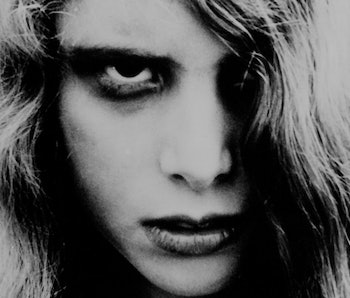 Horror master John Carpenter is enjoying a bit of a resurgence. He’s in the middle of a worldwide tour behind his second album of music, appropriately titled Lost Themes II. He was also recently announced as the executive producer of the next installment in the Halloween franchise, which he began with the monumentally influential original movie in 1977.

But the filmmaker-turned-musician made a recent appearance on WTF with Marc Maron to take a shot at shows like AMC’s The Walking Dead that he sees as derivative of movies that his friend George Romero made – nearly five decades ago.

At 68, Carpenter is a bit of an elder statesman who seems to have not-so quietly retired from filmmaking since his last work, the underwhelming psychological thriller The Ward, released in 2010.

Of the popular mainstream zombie series, Carpenter lamented, “That was a movie that George Romero made back in ’68,” referring to Night of the Living Dead, which basically invented the modern zombie genre. “People have milked his movie,” he continued, “and they are still milking it.” He ended by saying, “Oh, its unreal.”

See for yourself by watching the entirety of Romero’s movie here:

Carpenter’s assertion that The Walking Dead owes a debt of gratitude to Romero is admittedly spot on. There’d be no walkers or Rick Grimes or Carl or even good old Negan without Night of the Living Dead.

But Carpenter’s comments are a bit unfair when you consider that every movie, comic book, and TV show in the now popular zombie genre can trace its roots to Romero. Single out The Walking Dead and you have to single out things like 28 Days Later or even the concept of the zombie apocalypse and give a tip of the hat to what Romero created.

You can listen to the entire episode, which also features an appearance by director Joe Dante, below: The comment is even more ironic when you consider that Carpenter has followed Romero’s lead, albeit in a more inventive style. His non-student debut film Assault on Precinct 13 borrows heavily from western classics like Rio Bravo, but its nameless and faceless zombie-like mob attempting to break into a remote police station could draw a direct connection to Romero’s own undead mob. Even Carpenter’s most famous creation, the masked killer Michael Myers from Halloween, is also a kind of unstoppable zombie.

Maybe Carpenter’s complaint was just a set-up to his broader point to Maron, which hints at why he may have given up the horror business altogether.

“I think horror is due for a new beginning here,” Carpenter told the podcast host. “Its due for a resurgence. We have to change it up. We can’t do these cheap poltergeist movies, either. Paranormal, that’s what Im talking about,” he said, curiously referencing the Paranormal Activity series from Blumhouse Productions, who is also doing the Halloween movie with Carpenter.

“Stop. Please stop,” Carpenter continued. “We’re due for a change, and I think it’ll come. Horror movies have been with us since the beginning of cinema, and they’re always the same. Most of them are bad, a few are average, and a couple are really good. And they keep changing with the culture. So they’ll change again, as the culture changes. As we evolve and move through time.”

Though what Carpenter is saying is probably true, it’ll most likely be up to the next generation to change things up, and not by, say, someone involved in a remake of your most famous movie. As he says, horror has been a part of the cinema since the beginning, and it’ll always be here scaring us half to death in brand new ways.