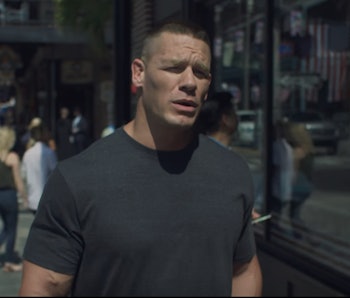 John Cena is many things: wrestler, internet meme, woke individual, and others. This 4th of July, Cena appeared in a new PSA by the non-profit Ad Council for the #WeAreAmerica Campaign, and it’s genuinely, un-ironically inspiring. Seriously, go watch it.

As Cena walks through a crowded city street, he begins speaking about what it means to be an American. After asking viewers to picture the “average American” Cena begins listing off statistics that prove the average American might not be what viewers first think of. Cena contextualizes the number of women, racial minorities, Muslims, gay, lesbian, bi, transgender, and disabled people currently living in the United States in a way that is truly visible.

Cena goes on to tie together America’s diversity to the nation’s history. “People who are lesbian, African American, bi[sexual], transgender, and Native American, and proud of it. We know that labels don’t devalue, they help define us. Keeping us dialed into our cultures and our beliefs and who we are as Americans. After all what’s more American than freedom to celebrate what makes us, us?” Cena asks, rather poignantly. All the while, a variety of Americans walk past Cena, giving a glimpse of the America that would make anyone proud.

Cena is probably best known as the all-American face of professional wrestling. His many appearances and cameos in movies and TV have cemented him as a cultural icon, and the internet is more than happy to make a meme at the man’s expense. Through it all, though, Cena lives up to his image as a patriot, and it’s great to see him use his cultural clout for such a great PSA. With recent events creating more and more divisions in American society, it’s good to see campaigns actively fight against ominous trends in both our society and the rest of the world’s.

More like this
Gaming
6.28.2022 3:00 PM
How Ace Attorney spawned one of the most enduring character ships ever
By Hayes Madsen
Culture
7.1.2022 9:00 PM
Male celibacy has evolutionary benefits — but not for the reasons you think
By Ruth Mace, Alberto Micheletti and The Conversation
Culture
6.28.2022 9:00 AM
8 sensational sci-fi shows and movies coming to HBO Max in July 2022
By Robin Bea
Share: