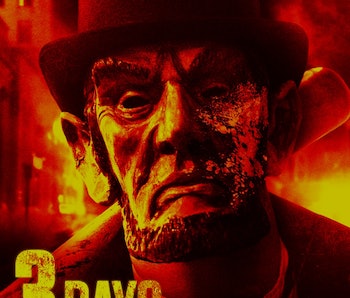 The Purge: Election Year’s Trump-baiting ad campaign will likely help the film draw big at the box office this holiday weekend, with the clever bit of marketing assisting the horror franchise’s already-solid name recognition. With each subsequent film, The Purge franchise seems to become ever more self-assured — that is, more bombastic, expressionistic, completely absurd, lathered in nausea-inducing, echoing sound design.

The bombast is, unquestionably, to its benefit. The series began with a by-the-numbers home invasion movie. Purge Night was a yearly celebration of evil, during which crime, including murder, is sanctioned in the United States, but it was more a expositional point than the center of its claustrophobic conflict. The second installment, Anarchy, took the viewer out into the nightmare of the urban streets on Purge Night, interweaving multiple plot lines and, most importantly, a team of protagonists of different socioeconomic backgrounds who had very different reasons for participating in the action.

Election Year takes the sprawling promise of Anarchy a step further. The third film’s trailer, in many ways, made the movie look like a horror-film expansion of the vitriolic, hate-fueled disarray of a Trump rally. Actually, it imagines a world in which those kinds of sentiments are institutionalized and transmogrified into a perverse religion; it takes place decades after a right-wing takeover. Essentially, the film explores all the implications the previous Purge films skirted around, resulting in some suitably troubling and confused Trump-era fiction — certainly, with more timely political import than House of Cards.

With the white-power-supported New Founding Fathers Association (who get increasingly evil and sadistic each film) in charge of the country, an anti-Purge Independent candidate, Senator Charlene Roan (Elizabeth Mitchell) is the insurgent. To protect the institution they began, the NFFA stage a plan to assassinate their rival candidate — “the Cunt,” the old white ghouls hiss repeatedly in their shadowy conference rooms — on Purge Night. This mostly gives the now-resident badass of the Purge franchise, Leo (Frank Grillo) — now Senator Roan’s head of security, for some reason — an excuse to get back onto the mean streets and fight. He does so, of course, even more fiercely, and with much more at stake then he did in Anarchy. He battles drones, forms nonsensical allegiances with bands of Crips, pulls bullets out of himself, and shanks people with a totally impractical knuckle knife.

One cant help but think of the Fast and the Furious franchise, which really embraced its farcical implications in its third installment, Tokyo Drift. Election Year commits to its franchises’ natural tendencies with a similar level of reckless abandon. Its slo-mo, bloody tableaus of ritual sacrifice by Punch-and-Judy-masked gangs in alleys are there for atmosphere alone. They are not, as in Anarchy, the center of the conflict, just hallways in a video game leading to melees with bigger bosses. In this case, these super-villains are all different representatives of the government, from the face-tatted Neo-Nazi leader to the wraithlike priest of the NFFA’s annual Purge Mass.

The political and sociological undertones in Election Year are too many to unpack in one article, even though they are too jumbled to add up to more than the sum of their parts. On some affective level, the third Purge film may be the most timely piece of political fiction we’ve seen in film or TV in recent memory — absent, perhaps, The People vs. O.J. Simpson. Its central political conflict is divided along class and race lines; a militia led by widely known activist Dante Bishop (Edwin Hodge) has been outspoken about the NFFA’s methods of targeted impoverished communities on Purge Night in an effort to bolster their own economic interests.

As in America in the past two years especially, central to the brimming conflict in The Purge is the idea that many strata of American citizens are regarded as lesser and disposable. The NFFA embraces seething discontent and prejudice, arguing that the human race is fundamentally full of hate that needs to be dealt with. “Purge and purify!” is the mantra at the Purge Mass, and a campaign slogan for the NFFA president candidate. “We are all sinners!” its spokespeople cry.

After 20 years or so of Purge Nights, its attendants’ hate has spilled over into government policy, forcing activist groups to retaliate with violence, and lose faith that American democracy is a reality at all. Images of burning cars, bodies, and deserted streets recall footage of the Ferguson riots seemingly self-consciously.

The themes get more discombobulated when Senator Charlie — whom everyone is working to keep alive so that she can trounce the NFFA is the upcoming election — talks militia leader Bishop down from assassinating the NFFA candidate Minister Edwidge Owens (Kyle Secor). “You’re just as bad as them,” Charlie yells, ultimately, trudging up decades of ethical disagreements about activism. Ultimately, the will of a savior white woman character — and yet, one who is never allowed to join the action herself by macho-man Grillo —dominates the agenda and all the major players in the film, largely with nebulous, moralistic rhetoric alone.

It’s a convoluted message that Election Year attempts to put across, with several incidentally problematic elements. Why are all the major people of color in the film seasoned fighters with checkered pasts? All of the films reference points may, in fact, amount to no message at all, leaving us with silly but undeniably brutal violence-porn, among a sea of floating, tangentially related symbols.

It seems people have been, already, able to creatively misinterpret the film:

Its important to note that Election Year is single-player-shooter-game-as-film. Though its mostly only the neo-Nazis wielding the AKs, everyone resorts to some form of shotgun to get to and from safe spots. It’s hard to watch in the light of events in this country in the past two months, certainly, making us wonder, whether we want to or not, whether Purge-like entertainment really provides any valuable service to society.

But maybe we need to be confronted with Election Year’s 1984-meets-Hostel picture of the era into which Trump’s ascendancy could lead us. Maybe its troublesome contradictions are truly the perfect evocation of our contemporary reality — sadly, immutable, unless we find some fairy-tale way of pulling together to effect bulletproof change. But still, Election Year is on some deep level, all-American escapism at its core; the same people win, and with the would-be finite ending leaving open the possibility for a sequel, we can assume that, as in America, the same old conflicts will persist in the Purge universe.