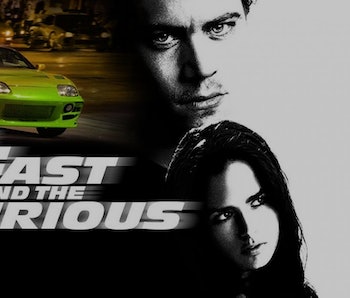 When it first hit theaters (a whopping 15-years ago today), The Fast and the Furious immediately captured a generation of impressionable teenagers and their imaginations. The action film, which featured wild practical car effects and a pack of up-and-coming actors, made the entirety of its $38-million budget back over the course of a single box office-winning weekend. Even so, the melodramatic story of felonious adrenaline junkies and the cop who’d been assigned to bring them down didn’t seem like a winner at first. The negative publicity surrounding The Fast and the Furious, in fact, put a real damper on the movie’s franchise potential.

About six seconds after the box office results came in, news outlets across the country began to analyze the street-racing scene that was thriving in several large cities. At that point, police were mostly concerned with rich drivers wrecking their Lamborghinis (which actually happened the weekend of the movie’s release). Once Paul Walker and Vin Diesel got behind the wheel of their Hondas, street racing suddenly became a problem that needed to be addressed.

Over the following weeks, many news reports called attention to both The Fast and the Furious and the street racing craze apparently raging through America’s youth. They also included enough pulpy introductions depicting the underground race scene to fuel 50 Furious sequels. Phoenix police were publicly concerned. The LAPD formed a special street racing task force and levied fines against those kids who even stopped to spectate.

Okay, so, the authorities’ concern over street racing may not have been entirely unwarranted. In November of 2001, a yellow Mustang crashed head-on into a Dodge Caravan during an illegal street race and killed two people. Obviously, the accident can’t be linked to The Fast and the Furious, but the release of a street-racing-themed film was absolutely a target in the wake of such tragedy.

The movie was actually condemned by professional compact car racers for the negative impact it may have on amateurs. An organization called Racer’s Against Street Racing was actually formed after the film was released, and is still active today.

Public condemnation wasn’t the only response to the movie, because there are always do-gooders who want to connect with the kids. Legalracing.com was created in response to the street racing craze in order to help give kids somewhere legal to race their cars. It didn’t last long (probably because the founder forgot the basic appeal of street racing: it’s illegal).

Fortunately for The Fast and the Furious, the attention paid to underground street racing died fairly quickly. The practice — which was in no way, shape, or form influenced by The Fast and the Furious — is still in fashion among a select group of people the world over to this day, but it’s linked to the franchise less and less (probably because of the international, nigh-Bondian scope the series has taken on).

The real legacy of ‘The Fast and the Furious’ isn’t in the initial craze it shined a light on, it’s in the seven-film franchise that’s done it’s part to introduce Hollywood to international audiences. The incredibly successful franchise that resulted from the unlikely partnership of Paul Walker and Vin Diesel and their expanding band of cohorts isn’t the story of a bunch of street racers, it’s the story of a group of friends united by their mutual love of driving super fast and doing crazy shit that usually results in explosions.

More like this
Entertainment
11 hours ago
Cassandro Unmasks the “Liberace of Lucha Libre” in a Breezy, Triumphant Drama
By Lyvie Scott
Entertainment
6 hours ago
Robert Zemeckis Has Found His Latest Tech Tool With AI De-Aging — And That’s Good
By Dais Johnston
Entertainment
7 hours ago
James Gunn Reveals DCU Plans, From New Superman to Swamp Thing
By Eric Francisco
LEARN SOMETHING NEW EVERY DAY.
Related Tags
Share: