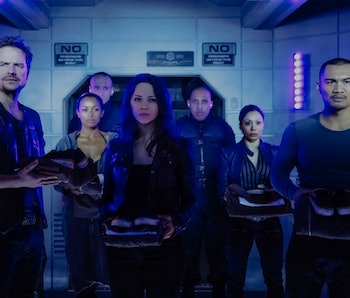 On July 1, fans of Syfy’s highest-rated show, Dark Matter, will finally find out what happened to the crew of the Raza. Get ready for another explosive adventure, because we’re just a day away from the Season 2 premiere.

Season 1 of the series followed the crew of a mercenary ship who wake up aboard a freighter that’s loaded down with weapons. It’s not too long before the six-member crew discovers each crew mate has a violent past that has made them all wanted throughout the galaxy. Confronted with their misdeeds, each member tries to reconcile their sins with newfound urges to be better people. Taking odd jobs from mega-corporations while hunting up clues to their current predicament, the crew forms a collective family bond that draws them into each others’ pasts and sees these former criminals make an honest attempt at washing their consciences clean.

If the show’s deeper philosophical themes don’t speak to you, there’s also a lot of sex and violence and more than a little Agatha-Christie-level mystery woven into Dark Matter for good measure. Trust me, you’ll enjoy yourself.

Getting to Know the Team

When Season 2 kicks off, you can expect to find five of the six members of the Raza chained up for their past crimes, having been duped by one of their own, the lovably gruff Six (Roger Cross). Though the matter at hand is gaining freedom from their current predicament, you can bet that the past lives of each of the crew wont stay in the background for long.

One (Marc Bendavid) would absolutely be the group’s dashing hero if he was even remotely as dangerous as the rest of the team. A former millionaire who ostensibly gave it all up to seek revenge on the man who killed his wife, One is never shy about prodding the group to do the right thing. Whether they listen to him or not is on a case by case basis.

The crew’s leader, biological experiment Two (Melissa O’Neil), was the season one standout. O’Neil’s no-nonsense demeanor and impressive skills easily elevated her to the top of the hierarchy, but the fact that she’s actually a robot may threaten all of that. There’s also a corporation that is dead-set on killing her, and things are tough going for Two this season.

Made in the mold of Firefly’s Jane, Three (Anthony Lemke) is probably the only person on the Raza with a real, live dubious sense of morality. The consummate cad, Three is the one who’s there to advocate for blowing shit up and making a little money. He’s also the only one of the crew who easily came to terms with his past. Lemke does a great job making the semi-shallow mercenary lots of fun to watch on screen.

The taciturn swordsman of the group still has some unfinished business with his family. Four’s (Alex Mallari Jr.) whole “mass murderer” rap may have been total bunk, but the royal family subplot that finds him on the run after being wrongly accused of his father’s death is one of the show’s more intriguing subplots. Also, those swords, yo …

Commonly referred to as the crew’s mascot, Five (Jodelle Ferland) is the Raza’s walking conscience. While her own story has yet to come to light (though we know she was a pickpocket at one point who stole the wrong thing), Five distinguished herself in season one by keeping the rest of the crew on the straight and narrow. Of course, her engineering skills also came in handy more than once.

You treacherous SOB! A fan favorite from the get-go, Six (Roger Cross) is a man who’s just trying to do the right thing for the galaxy. A former rebel, he was buckled by his own conscience after being duped into setting off a bomb that kills thousands. His guilt over the issue is the (apparent) reason he turned the crew of the Raza over to the Galactic Authority. Expect Six to be front and center in season two as the crew comes to terms with his betrayal.

After spending the first season going all Data all over everyone’s asses, the Android (Zoie Palmer) has finally begun to accept the emotions creeping into her system as more than just a programming flaw. Don’t expect her flirtation with humanity to go away any time soon, as the remarkably talented actress is set to explore her feelings even deeper in season two.

In addition to the core crew, two new travelers are joining the Raza for season two. Shaun Sipos is coming on board as a young medical doctor who, alongside everyone else on the team, has a dark secret that could put the crew in jeopardy. Former Game of Thrones actress Melanie Liburd is also joining the crew as Nyx, a character who threatens to throw the entire crew for a loop.

In a conference call with Liburd and Cross, O’Neil described Nyx as, “strong and powerful,” adding that the actress behind the crew’s new bo-staff wielder, “brings a natural sexiness to the part.”

The overarching plot of the second season has yet to be revealed, but Cross hinted that the season will involve more external conflict this time around, saying, “Now that we’ve established who the characters are, we can explore outwards.”

While the crew is still struggling to get accustomed to their past, it seems that their days of wandering the Raza feeling existential feelings are coming to an end. In season two, it’ll be about multi-tasking emotional progress with big action.

According to O’Neil, “We find ourselves in the midst of this budding intergalactic corporate conspiracy. So, while we’re trying to figure out who the heck we are, we’re having to deal with something so much larger than us and it turns out we have a very important role to play.”

At the core of Dark Matter is a simple question: is it ever really possible to start over? The six people aboard the Raza confront this question on a daily basis, as they try to reconcile the people they once were with the people they woke up as. The showrunner, Joseph Mallozzi, is committed to taking those ruminations to dark place in season three, while amping up the adventure to a new degree.

As Mallozzi told Gizmodo, “I’m gonna say that season two will put the ‘Dark’ in Dark Matter … In our show, no one is safe.”

More like this
Entertainment
Sep. 21, 2022
Is Andor Season 2 confirmed? Everything we know about the Star Wars show
By Mónica Marie Zorrilla
Entertainment
Sep. 25, 2022
'Mandalorian' Season 3 could reveal the secret origins of Mandalore
By Dais Johnston
Entertainment
Sep. 26, 2022
Rick and Morty’s scariest episode ever copies the best sci-fi of the year
By Corey Plante
Share: