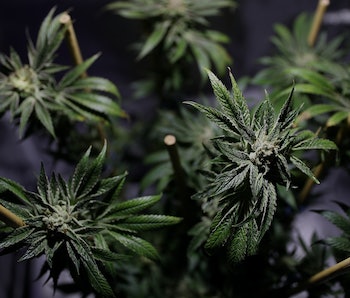 A lead medical researcher at New York University has been dismissed and several clinical studies shut down after protocol violations were discovered in a trial on the effects of a cannabis-like drug for patients with post-traumatic stress disorder.

The news comes as a huge blow to PTSD sufferers, and in particular to trial participants, who must now accept that the sacrifices they made for the research came to nothing.

Diane Ruffcorn was one of the participants in a trial led by Pfizer, which took images of patients’ brains while they were taking either an experimental drug developed to mimic the effects of marijuana or a placebo. She writes about her life as a survivor of childhood abuse and as a guinea pig for PTSD research.

“To say that I am extraordinarily disappointed would be a gross understatement,” Ruffcorn wrote on her blog, called A Little Bent, earlier this month. “Disappointed in the outcome. Disappointed in how the studies were conducted. Disappointed in myself for…? Getting my hopes up? Not listening to my gut when things seemed wrong? I’m not sure.?” She expressed dismay at particularly that data from all of the three trials she participated in would be thrown out.

NYU’s lead on trials, Dr. Alexander Neumeister, was placed on leave after staff members raised concerns about compliance with research standards with the university. He later resigned. His lawyer told the New York Times that while protocol violations did occur, they were not as egregious as the university has made them out to be.

An FDA investigation found that insufficient oversight was given to participants, that some records were falsified, and that case histories were inaccurate or incomplete. The violations “jeopardize subject safety and welfare, and raise concerns about the validity and integrity of the data collected at your site,” according to an FDA letter to Neumeister obtained by the Times.

It may be true that Neumeister and team did their best under trying circumstances. New PTSD treatments are desperately needed, and it’s easy to see how researchers might feel that the end justifies the means in achieving that goal. It’s also clear that the trial had significant hurdles to overcome. The study, which was supposed to include 50 participants, only managed to enroll 14. Ruffcorn reports that she endured five “false starts” where she was told the trials would begin, but they in fact did not. Each time, she was asked to go off all of the medication she uses to help manage her trauma, and then back on.

Ruffcorn wrote this, in a post titled “Scared Shitless, Beyond Ready,” the day before she travelled to New York to participate in the study:

It’s been a very long road getting to this point. Thousands of miles travelled, extensive psychological and physical workups, brain scans…but it has been as validating as it has been exhausting. TEN MONTHS of planning and preparation. I have been taken off and put back on my medications FIVE TIMES due to false starts. I am fried.

But here I am, FINALLY. After all this time, all the delays, all the highs, all the lows – it’s time.

I know and understand that I’m going to be deliberately triggered repeatedly. More pokes, more prods, more questions, more scans. I know I will very likely melt down. I know that this medication may not even work.

I also know that I’ll be surrounded by some of the most qualified and brilliant minds in PTSD research – and I trust their knowledge and ethics. I know that they will take excellent care of me.

It’s possible that Neumeister and his team failed to follow protocols to the letter out of respect for participants like Ruffcorn who had already been waiting so long, but the unfortunate result of that failure goes beyond a loss of trust. Requiring PTSD sufferers to re-live their trauma while undergoing brain scans and other tests is a pretty big ask, especially when only half of them will be given the drug intended to minimize symptoms, and the rest only a placebo.

The termination of the trials is a blow to trial participants and to NYU, but it’s also a major setback for PTSD research in general. No prescription medication currently exists that has been formulated specifically for PTSD, and many patients find no relief from antidepressants alone or in combination with psychotherapy. MDMA (the active compound in ecstasy) has shown a great deal of promise when used in a therapeutic setting, although FDA approval is still at least five years out.

Many sufferers find, however, that marijuana use eases symptoms. Trials to prove out marijuana as a PTSD therapy are underway, but they face significant regulatory and financial hurdles. For one, the long history of drug prohibition makes it politically unpopular for government grants to go towards marijuana research. And because you can’t patent marijuana, you can’t get pharmaceutical companies to fund expensive clinical trials. It is possible, however, for them to create derivative substances that are potentially profitable, as was the case in this instance. The cancellation of this research could push Pfizer and other drug companies away from continuing this sort of work.

More like this
Mind and Body
Sep. 25, 2022
Is ketamine the secret to treating depression? Mental health studies reveal its potential
By Sarah Sloat
Mind and Body
Sep. 21, 2022
Is someone you care about going through a medical crisis? Here’s how to best support them
By Katie MacBride
Mind and Body
Oct. 3, 2022
Having this many nightmares a week may be tied to extreme brain aging
By Abidemi Otaiku and The Conversation
Related Tags
Share: