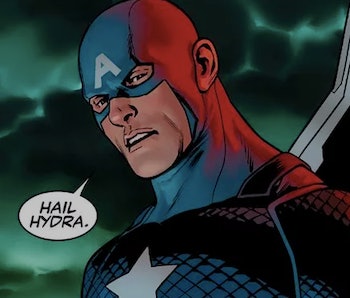 It’s hard to overstate how weirdly dark comics were for a couple decades. In an attempt to be edgy and gritty, comics from both Marvel and DC resorted to more and more disturbing plot twists to surprise readers. Lot of these plots were removed or changed later, but others have weird legacies you can still see today. For the sake of drama, characters were either killed or worse — often without the foresight to understand the repercussions of such twists later on in the comics.

That isn’t to say there aren’t still dark plots currently written into comic books — look at Captain America being a Nazi. (Or is he? More on that in a minute.) That storyline, along with recent developments in Watchmen and Marvel’s Civil War II revelations, shows there’s still plenty of dark stories unfolding. Luckily, as comic book readership expands and diversifies, the stories are slowly gaining some nuance that didn’t exist previously. That said, there are some glaring twists in comic books that made readers look twice at exactly what was happening. Some of these twists are recent and still developing, but some of the older ones have gained a certain notoriety among comic book readers.

Captain America is a member of Hydra.

The most high-profile plot twist in the past year is the revelation that Captain America’s been a member of Hydra all along… for a week, anyway. Aside from all the troubling implications of this reveal, it single-handily sort of makes me wish that Captain America remained old and facile.

Of course, as is so often the case with comic books, it turns out that the whole thing wasn’t even real; the Hydra identity was just an implanted memory put into Cap by the Red Skull. Fun stuff.

Thank god for Spider-Gwen, because Spider-Man’s original crush did not have a great history prior to her new solo adventures as a Marvel superhero. Perhaps the most infamous of the many Gwen Stacey deaths was the time she was in a relationship with the Green Goblin, gave birth to his twins, was killed, and had her children rapidly aged into teenagers to kill Peter Parker, because Osborn convinced them Parker was their real father.

It was a gross story that further cemented Gwen Stacey as the Spiderverse’s unluckiest character. I cannot stress how thankful we should be for her recent comeback in the Marvel universe as a kickass heroine.

There are too many plot twists in this miniseries to single out, so the whole series was added to this list. Ultimatum was a big event in Marvel’s “Ultimate” universe (back when it was a separate line of comics). I can just list off the body count to give an idea of the many “twists” Ultimatum produced. From The Wasp being eaten by a cannibal mutant, to the deaths of Human Torch, Nightcrawler, Wolverine, Professor Xavier, Magneto, and Cyclops. Ultimatum pretty much finished each issue with writer Geoff Loeb killing someone off in the most horrific way possible.

In a story featuring the destruction of New York, cannibalism, suicide bombers, and multiple head explosions, Ultimatum was just one bloody plot twist after another, and readers didn’t respond too well to it. The story honestly might have been too much for comic book readers, and proof that blood and gore for the sake of violence is not really popular with any demographic of readers.

I guess by now we can only assume Marvel’s Ultimate universe was a really strange time for the comic publication. One of the many bombshells dropped during this edgy period for Marvel is the revelation that Scarlet Witch and Quicksilver used to be lovers. And yes, they were still siblings in the Ultimate universe, in case you were wondering. Pulling a Lannister-esque twist before the dawn of Game of Thrones was a weird move for the X-Men characters.

Luckily the two are doing just fine in the current Marvel continuity, with much of the Ultimate universe’s consequences having been erased after the events of Secret War.

Rape as a narrative tool shouldn’t be used as a crutch to shock audiences. Comics have been using it as a foil for so long, this entire list could have potentially been filled with all the characters who experienced this terrible ordeal. So I picked one, just to highlight how: 1.) gross it is as a plot-point, and 2.) oddly absent it is later on in the character’s history.

I’m talking about Tarantula, partner to Dick Grayson’s Nightwing, who kills the villain Blockbuster and then proceeds to rape him. If that wasn’t creepy enough, it’s almost unmentioned in the current Dick Grayson comics, where he’s basically a secret agent, sex symbol. At least writer Devin Grayson has publicly apologized for his liberal use of the rape scene as a plot twist.

The implications to DC Rebirth’s Deus Ex Watchmen are huge. Not only does it essentially chalk up the “New 52” as some sort of villainous(?) plot against DC’s biggest heroes, but it creates a lot of weird implications for the changes that occurred during the reboot. I mean lots of characters were killed, replaced, or had their relationships disintegrated when the 52 was announced.

Whether or not the decision to use the Watchmen as the reason for the negative changes made during the New 52 is a mea culpa from DC, or a way to integrate one of their most acclaimed stories to the DC universe (or both), remains to be seen. Until then, the twist is disturbing for its impact on the DC comics going forward, but could play out as an overall positive for the DC Universe going forward.

Oh boy, here’s one to unpack. First, James Rhodes aka War Machine is killed by Thanos. Beyond the incredibly shocking loss of a Marvel mainstay, it has odd parallels to the first Civil War, where the first superhero casualty was also a black superhero, Goliath. Controversy naturally followed, especially after it was revealed that Black Panther authoer Ta-Nehisi Coates expressed some reservations about this decision.

Not content with just killing off one hero, Marvel did us all a dirty by also taking out Jennifer Walters, aka She-Hulk. This one stung, especially since her solo comic was one of the best comics in the last 10 years. Both deaths came as out-of-left-field choices in a story where readers were expecting some big casualties.