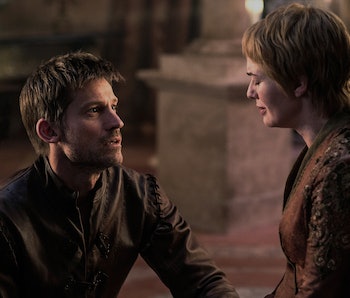 House Lannister’s motto might be, “A Lannister Always Pays His Debts,” but the unofficial motto should concern sass. While House Stark wins for Honor and House Targaryen wins for most secret mysterious relatives (and whitest hair), the Lannisters, hands down, are the sass kings (and queens) of Westeros, seconded only by the Martells. We present a definitive ranking of Lannisters, from the lowest sass levels (mild) to the highest (muy picante!).

Lancel Lannister’s sass game is so sus, he can barely call himself a Lannister. He’s gone from a shrinking mooncalf — bossed around by Tyrion and used by Cersei in the early seasons — to a humorless zealot who is gung-ho about The Faith. The Lannister force is weak with this one.

We often forget about Tywin’s stern younger brother, but his sass levels are nearly as high. Like Tywin, he’s acerbic and never afraid to patronize. In the latest episode, he ever showed no fear when faced with the Franken-Mountain.

Cersei is sassy, but her driving force is rage. She’s angry she wasn’t born a man and is therefore inferior in her father’s eyes; she’s angry at Tyrion for killing her mother in childbirth; she’s angry at everyone who witnessed her Walk of Shame. She’s angry at anyone who isn’t a Lannister and angry at some people who are. Her sass holds a biting edge that makes it entertaining, but it also makes it too serious to rank high in the Lannister Sass round-up. You need to have inner peace in order to achieve peak sass.

Jaime’s sass levels have ebbed and flowed as we’ve gotten to know him. Season 1 Jaime was all mean snark, baiting the Starks, tossing kids out windows and generally being a dick. Seasons 2 and 3 were transitional times — with his fraught conversations with Catelyn Stark and his barbed exchanges with Brienne being particularly delightful. Season 4 brought quality sass time with Tyrion, before he strayed into that unfortunate Dorne plot in Season 5.

Though he’s been understandably grave since Myrcella’s death, his sass returns in full force in Season 6’s “Oathbreaker,” when he meets The Mountain for the first time. He says, “What did you do to him exactly? I haven’t been able to get a clear answer. Can he understand what we’re saying? To the extend he understood complete sentences in the first place.”

That couldn’t have made it clearer: Jaime’s sass has returned, along with his fly leather jacket. Thank the Seven for that.

Tyrion Lannister has a quip for every occasion. He threatened and hit the king, was cavalier about his own murder trial, and even managed to infuse his most painful speech with one liners. Even when nothing is happening like the Meereen plot in Season 6 so far, Tyrion makes it watchable.

Tywin Lannister sent the most powerful man in Westeros to bed without his supper, commanded Arya’s respect, held his own in a conversation with the Queen of Thorns, and cowed all of his sassy children into silence. Even Tyrion himself fell short of quippy comebacks when Tywin wielded his full force.

Were he still alive, Tywin would still be the sassiest man in Westeros and Essos. As of now, may he rest in gloriously sneering peace while Tyrion carries on his legacy. He’d probably have something especially spicy to say about that.