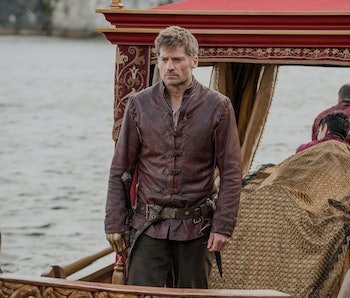 Although Game of Thrones Season 6 is venturing into the untraveled realm beyond the Wall of the books, several characters have stories we can still parse out. This is partly because some remain on-book, and partly because Game of Thrones fans have the spy-network resources of Varys and the stealth of a Faceless Man in their set-stalking abilities. Jaime Lannister is one who will be largely on-book, and although it may deviate, we can still outline what his story will look like. Oh, the things he’ll do for love.

It will begin with a funeral

Another day, another dead Lannister kid. Unfortunately this one didn’t deserve it nearly as much as Joffrey — by all accounts, Myrcella Lannister was the most well-adjusted and balanced. She even had an appropriate love interest, which is more than can be said for her twin-cest loving parents, her child-groom brother, and her whore-loving-and-murdering uncle. But as her mother Cersei said to Oberyn in Season 4, “Everywhere in the world they hurt little girls.”

And though Oberyn claimed that Dorne is an exception, ironically, he’s the reason she died, poisoned by his vengeance-seeking lover.

It might have made more sense for Jaime to instantly turn that boat around and wreck shit in Dorne after her death, but the plot must go on. And thank the Seven, it’s taking him away from Dorne. Lena Headey, who plays Cersei, told Entertainment Weekly about Season 6’s twincest, noting, “Her relationship with Jaime is at an all-time weird level. It’s juicy, and it’s so fucking dark.”

Hopefully it’s not accidental-rape-next-to-the-dead-body-of-their-child dark. But from this, we can surmise that Jaime’s plot will once again be partially motivated by Cersei.

Jaime’s fly leather jacket will not take a backseat

This might seem like a trivial plot point, but the jacket that spawned thousands of Reddit comments and hard-hitting analytical articles will be making a return. So for anyone on edge about Ser Pounce’s chances of a comeback, take comfort that if he’s not back, at least the next-best fan favorite is.

Jaime will be in not one, but two, major battles

Jaime Lannister is going to have a very big year. He will team up with the Tyrells against the Faith in King’s Landing, and he might just be Margaery’s unlikely savior. As he also spirited his brother Tyrion out of jail in Season 4, he would be two for two with jailbreaks.

This is likely to occur in the middle of the season, so Jaime will linger in King’s Landing long enough for things with Cersei to get full-weird, in accordance with Lena Headey’s promise.

Jaime and Bronn Will Have another excellent adventure

Varys’s little birds have brought whispers and intel that says Jaime will then go to Riverrun, turf of House Tully, and he will be accompanied by his dream team road trip buddy, Bronn.

This was a major plotline in an early book, but it got sidelined in favor of an entire sub plot that existed to make the “you want a good girl but you need the bad pussy” line happen. And no, we will never stop bringing that up, because the world needs to remember what Emmy-winning writing looks like.

Jaime will clash with The Blackfish at Riverrun

Catelyn Stark’s coolest relative and Red Wedding Survivor The Blackfish is set to make a comeback. By all accounts, he will be returning for Season 6, but he will be on the opposing side of the battlefield. That will lead to Jaime’s second major battle.

Hopefully Jaime Lannister and his leather jacket will emerge unscathed, but as this is Game of Thrones, we should prepare ourselves for goodbyes.

At any rate, Season 6 is supposed to host the show’s largest battle ever — but don’t discount the smaller battles with Jaime Fookin’ Lannister. He’s has a hell of a season ahead.