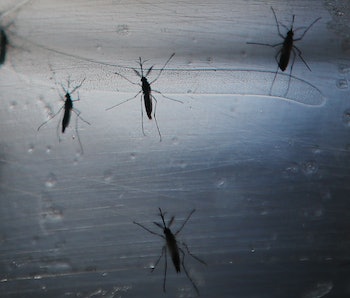 A military medical research institute has announced that it plans to move ahead with human testing for a potential Zika vaccine by the end of this year after getting two positive results with laboratory mice. Results from the preclinical study, led by the Walter Reed Army Institute of Research, were published this week in Nature.

The study tested two types of vaccines, one built from Zika DNA, and the other from purified inactivated virus (PIV). In both cases, mice showed the appropriate antibody response to a single dose of the vaccine, indicating that humans were likely to respond favorably. The planned Phase I clinical trial will focus on the purified inactivated virus vaccine called ZPIV because similar vaccines have been approved for use in humans, and, therefore, regulatory hurdles may be easier to overcome.

The army is not the only organization working at breakneck speed towards a Zika vaccine. The National Institute of Allergy and Infectious Diseases hopes to begin testing on a DNA-based in September. A second team, within the National Institute of Health’s Laboratory of Infectious Diseases, is building a vaccine that uses live, but weakened, Zika viruses to stimulate the immune response. That product is also scheduled for testing towards the end of this year.

Meanwhile, the summer Olympics in Rio de Janeiro are nearly set to begin, and both athletes and spectators will have no protection from Zika beyond mosquito repellant, bug hats, and condoms. While Zika transmission is scariest for women who are or might become pregnant, it has also been linked to the rare but horrifying Guillain-Barré Syndrome.

More like this
Mind and Body
7.28.2022 9:19 PM
A deadly disease-causing bacteria was detected in US soil samples — here's what you need to know
By Katie MacBride
Mind and Body
7.29.2022 10:45 AM
Why this pervasive immune chemical may be behind pain in IBS
By Miriam Fauzia
Science
8.5.2022 6:00 PM
How is nature connected to well-being? It's complicated, scientists say
By Tara Yarlagadda
Related Tags
Share: