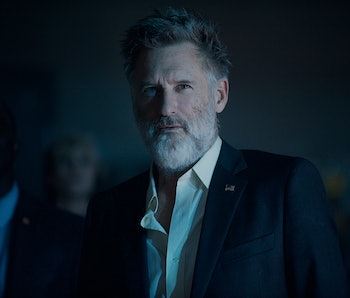 In the 20 years since the War of 1996, Washington D.C. has been rebuilt as a Singapore knock-off; a ferris wheel very similar to the London Eye has been erected along the cleanish-looking Thames, and peace between nations has become a given. The planet where the bulk of Independence Day: Resurgence takes place is more prosperous than the Earth Will Smith saved two decades earlier – thanks, one presumes, to the adoption of alien technologies that have made energy cheap, maybe even free. But this new world is only superficially different from the one that lay in ruins. Little progress has been made. And that’s not just because the blockbuster in question is a jingoistic rehashing of Revolutionary War mythology — though it is. It’s because ID2 is radically committed to the idea of monolithic, immutably capitalist, and innocuously Trumpian American culture. It’s a movie about saving the world from aliens and new ideas.

Despite its racial diversity, the characters in ID2 are about as varied as your average line of foosball midfielders. The only thing that seems to separate Liam Hemsworth’s roguish (emphasis on the “ish”) space tug captain from Angelababy’s phonetic English speaking Chinese fighter captain is that she habitually stands next to a very big, very red flag. Beyond that, they’re pretty much samesies, just two Earthlings drinking Moon Milk out of cartons branded in a multiplicity of languages. And what does our space tug captain dream about? Moving his fiancé to a home in the suburbs with a stone wall.

This cultural continuity might be comforting for popcorn munchers (there’s something to be said for not pulling focus from the shoot-‘em-down element of the plot), but the worldview embraced by the film’s protagonists is distractingly bizarre. They are all at peace with their history, which seems to go something like this: After the first alien invasion shook the Etch-a-Sketch of the global economy, toppling most significant infrastructure, the citizens of the world banded together and used new, massively disruptive technologies to rebuild their countries as Epcot Center pavilions protected by Paul Blart-style space police. It is further implied that Americans rebuilt their major cities in the same places, which is to say on top of the graves of roughly 150 million people (the country was less urbanized 20 years ago). But not everyone benefited from the reconstruction.

Given the chance to create a new system better suited to a new, post-Alien reality, the human occupants of the Independence Day universe said, “Nah, James Madison pretty much saw this shit coming.” Seems like a missed opportunity, right?

(An alternative reading of the movie is that the presence of the London Eye and Burj Khalifa, two structures built after 1996, heavily implies that cultures evolve in specific directions regardless of historical contingency. This is almost too horrifying to contemplate).

What this means is that America’s apparent prosperity in the movie is not — as it might initially appear — born of the impregnable centrism guaranteed by national unity. Rather, it is the result of extremism. Specifically, it seems to be the result of President Thomas J. Whitmore’s extremism. We must believe that Bill “POTUS” Pullman leveraged his unchecked executive power — lest you forget, Congress blew up — and new energy technologies to recreate a system rife with inequalities. This isn’t supposition. There are several scenes in which Judd Hirsch drops Yiddish bon mots while visiting economically depressed American exurbs.

If President Whitmore’s goal was to protect American culture, he failed absolutely miserably. The movie contains almost zero diegetic music because Spotify and Taylor Swift never happened and those people not wearing uniforms all seem to have purchased their clothes from Zara two and a half years ago. The rebuilding process has not led to any apparent artistic or cultural progress. The architecture is blah. The haircuts suck. The conversations are stripped of slang. The age of American innovation is apparently over.

The age of super cool space guns, however, is not.

And what are those guns trained on in the new movie? Let’s sidestep the spoilers and go with this: Monarchy. The most obvious non-phenotypical difference between the Americans and the extraterrestrials is their leadership structure. On the one hand, the line of succession allows for the seamless transition and exercise of American power despite the death of, at minimum, the 18-plus civilians leaders standing between a military leader and Commander-in-Chief status. On the other tentacle, the aliens have no contingency plan for the death of their field general.

In this sense, the movie is a creative retelling of the American origin story. A slimy alien has stepped into the King George role. A bonkers former president is doing a solid George Washington. Sexed-up Jeff Goldblum has taken over for Paul Revere. The Earth’s molten core has solidified into a kinda crap metaphor for taxation without representation. And Brent Spiner is the French musket manufacturing industry supplying revolutionary brigades.

Which is all to say that Independence Day: Resurgence is a film overloaded with American themes that doesn’t seem to like Americans very much. The scrappiness of the original, which posited that Will Smith could marry a stripper, feel unfulfilled at his job, and still save the world, is gone. If the first movie transcended its own stupidity because it was about sympathetic heroes fighting for humanity, the second movie doesn’t, because it’s about people so emotionally deadened by loss that they think only of maintaining a less-than-perfect status quo. If the first movie was about triumph, this one is about mitigating damage. It’s a fun movie and worth seeing, but it’s also really sad and weird; and Bill Pullman looks bizarre when he shaves.