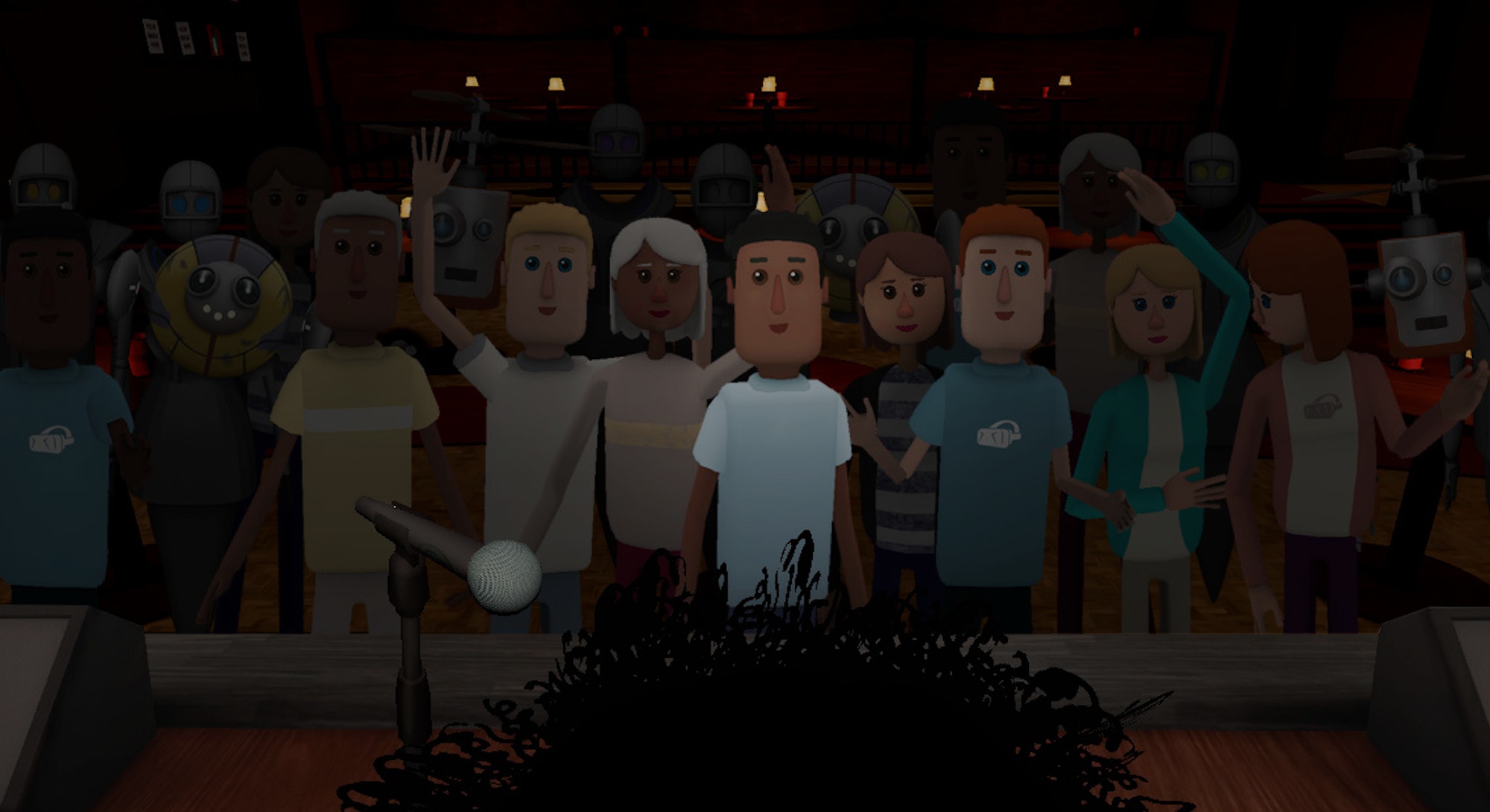 In the early days of virtual reality, Marc Hansen desperately needed test subjects. He spent weeks prodding, even begging, neighbors and friends to come over and spend hours tethered to a chair in one room of his house. Hansen would stand there, watching his reluctant subjects aimlessly looking around while they tested out his first forays into the Oculus Rift’s developer kit, unable to see what they were doing in his digital world.

Things got better when he started taking a Samsung Gear VR to the local pub. There, people could take turns putting on the headset and ditching the sights and sounds of the bar for Hansen’s world, but he quickly realized that this wasn’t the way he wanted to experience virtual reality. Hansen has three kids, and he wants them to be able to interact and experience virtual reality together, rather than in their own isolated worlds. But collaborative experiences haven’t fully caught on in VR yet, mostly because of the simple fact that not enough people own a headset.

“Right now the virtual experiences are very cool, they are new, novel and innovative, which is why they’ve been getting a lot of attention,” Sun Joo (Grace) Ahn, an assistant professor at the University Georgia and a researcher of social interactions in virtual reality, tells Inverse. “But once people find out that this is very isolating and they have to go through these experiences alone, it’s going to hit a wall.”

And Hansen thought he already had a solution to that problem — smartphones.

“Most of the time there’s only going to be one unit in the room,” Hansen tells Inverse. “If you’re passing around a GearVR and everyone is messing around with their phone anyway then why don’t we go ahead and let them interact with the person in the center?”

Hansen put his developing energy into the idea and ended up with a game called Polo VR, which he says was inspired by the Wii U. The game is simple — a player in a GearVR headset takes the perspective of “Polo,” a mouse running around different environments collecting cheese, while another player on a phone or tablet plays the cat trying to catch the mouse.

Polo VR won a bronze award at the 2015 Oculus Mobile VR Jam. Hansen says very few of his competitors were thinking about cross platform play and ways to include others in a virtual reality social experience.

Polo VR is just an early solution to the current limitations of the VR landscape. As the technology becomes more ubiquitous, the future of social VR and how we interact in digital environments will expand.

Going to the Virtual Comedy Club

In a simple virtual cafe, 30 people gather around the stage before musician and comedian Reggie Watts, or a blocky avatar version of him at least, takes the stage. He does his whole set, complete with signature synths and nearly a full range of motion. Some users watch from a stationary point of view, some dance and move around, and some just wave their hands in enjoyment.

That was an actual experience users of the virtual reality world AltspaceVR were able to watch (even if it was super glitchy), after the company recorded a live motion capture of Watts’s set at a live comedy club event.

Bruce Wooden, AltspaceVR’s head of developer and community relations, says the company is planning more live-to-VR events soon. They’re calling the experience “Front Row,” and could include comedians, musicians, fashion shows, and yoga sessions. However, it’s a cross platform world — AltspaceVR works on nearly all of the available consumer headsets, but experiences differ widely for users of each.

Most of the differences are in the headset’s control schemes. Oculus users can control their avatar with either an Xbox controller or mouse and keyboard. HTC Vive users have hand and room motion sensors, and Samsung Gear VR users have an odd touch-pad on the side of the headset. Playstation VR will have its own controls, as will Google’s Daydream controller and headset, both of which are set to debut later this year, and Leap Motion’s headset depends mostly on wild hand tracking technology.

“There’s no prewritten standard on exactly how to do VR controls, it’s not like with PC games, where everyone uses a mouse and “WASD” keys.” Wooden tells Inverse. “There’s no established anything for VR right now, so how do you have a person move through an environment? Everything is up in the air.”

He says in the beginning users with more expensive and advanced headsets will become performers able to experiment in social spaces, while those with lesser headsets will have to settle for simply watching.

Facebook is the obvious platform users will look to for clarity, since it owns Oculus. But it’s unclear at this time how open a Facebook social platform would be to all of these new competitors and interaction methods.

No Two Experiences the Same

“It’s really difficult to say there’s one single feature that every VR simulation has to have,” Ahn says. “A lot of people tend to think of virtual simulations as infinitely better than traditional media, but that might not be the case for every single person.”

Ahn says social experiences in VR are going to vary wildly based on equipment, software performance, and users’ individual personalities, but overall, what drives our fundamental need for social interaction won’t change.

“If [VR] does become that ubiquitous, it will definitely have a very big impact on how we communicate,” she says. “But I dont know if it will fundamentally change the reasons why we are motivated to communicate.”