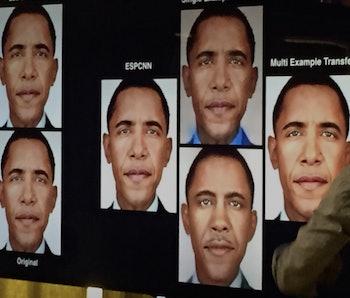 “Magic Pony’s technology — based on research by the team to create algorithms that can understand the features of imagery — will be used to enhance our strength in live and video,” Dorsey writes.

Magic Pony works on video technology that upscales, compresses, and enhances video through machine learning. The company also builds artificial intelligence that understands the content of an image through seeing an object multiple times. Most importantly for Twitter, however, is Magic Pony’s advancements in sharpening compressed video files through deep learning. Magic Pony’s technology recognizes patterns in both high- and low-resolution images, and then clears a low-resolution image up by using knowledge of what certain features should look like.

Magic Pony’s addition could help Twitter in its plan to grow through live video. In addition to recent technology acquisitions, Twitter announced a partnership with the NFL in April for live-streaming Thursday Night Football.

“Together with Twitter, we’re looking forward to vastly accelerating our rate of research; growing our team, which will serve as the European homebase for Twitter’s machine learning efforts; and continuing to publish,” Magic Pony writes in a blog post. “We’ve barely scratched the surface of what we think is possible in this area and are excited to see what the future holds.”

Magic Pony has done well for a European technology company. It recently raised $2 million in investments in one of the largest seed funding rounds in Europe, reports to Business Insider. Silicon Valley seemed to be the ultimate goal rather than a European company, though, as investor Suranga Chandratillake told Business Insider.

“We are delighted that an iconic West Coast company has once again recognised that Europe is right at the forefront of the A.I. revolution,” Chandratillake said.

Of course, not everyone thinks so highly of the buyout:

Twitter has been investing in machine learning for the past couple of years. The company picked up visual A.I. company Madbits in 2014 and machine learning company Whetlab in 2015. Hugo Larochelle, one of Twitter’s machine learning and A.I. researchers, will be speaking in New York at the International Conference on Machine Learning this week about neural networks and deep learning.

Using A.I. to better understand live video could save Twitter from stagnation. Twitter already has Cortex, a division that can identify objects in live video, but no one is going to watch live video if the quality is unbearable. Magic Pony could help Twitter overcome that barrier and become a Silicon Valley darling once again.