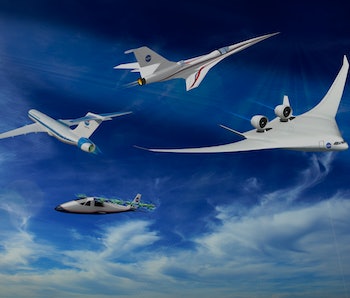 In his keynote address at the Aviation 2016 conference this morning, NASA Administrator Charlie Bolden confirmed what aeronautics enthusiasts had long been waiting for: “Yes, I can affirm what many of you have heard,” Bolden said to a rapt audience of aviation industry professionals, engineers, and academics.

“NASA is returning pilot X-planes to its research portfolio.”

The highlight of his address, entitled “Concept to Reality — Our Journey to Transforming Aviation,” was NASA Aeronautics’ New Aviation Horizons, the ten-year research plan that will bring X-planes — the highly experimental aircraft that have the potential to push flight into the supersonic age — back on the agency’s agenda. Within the next decade, Bolden said, NASA hopes to test five mostly large-scale X-planes to test new technologies, aircraft builds, and engines.

But these aren’t just high-flying dreams; NASA is ready to fly a small-scale electric X-plane as early as next year. “You heard that right,” Bolden said. “Next year. Not somewhere down the road.”

The general aviation X-plane has received its official designation — the X-57 — and will be called Maxwell. With 14 electric motors and propellers integrated into a uniquely designed wing, the new plane will be used to test propulsion technology that could result in a fivefold reduction energy required for a private plane to cruise at 175 miles per hour. Named for James Clerk Maxwell, the Scottish mathematical physicist who dreamed of flight, the X-57, Bolden said, “will bring us to a new age of aviation.”

The X-plane initiative is NASA’s platform for meeting its three main aviation goals: Cutting back on fuel use, reducing emission, and eliminating noise. Three other subsonic X-planes are in the works, with high aspect ratio wings to increase efficiency, new composite structures to support “non-circular shapes” like hybrid wing bodies, and multiple modifications to reduce drag.

The fifth, large-scale hybrid electric X-plane, which NASA hopes to fly in the mid-2020s, will aim to reach supersonic speeds without the supersonic boom. This project — which Bolden called “NASA’s moonshot for aviation” — is still in its very preliminary stages, but the ultimate payoff will be incredible. “Going around the world in six hours. Dubai to New York in an hour. That’s absolutely incredible,” said Bolden.

NASA’s New Aviation Horizons initiative, based on the President’s 2017 budget request, will receive $10.6 billion over ten years in order to develop a cleaner transport system.

Bolden’s fully aware that some of the X-plane project objectives seem absolutely impossible, but he encouraged the crowd to dream big anyway. “That’s the hardest part,” he said. “But you’ve got to believe. You’ve got to believe that this can be done.”

More like this
Science
8 hours ago
45 years ago, the first Space Shuttle made history without going to space
By Allie Hutchison
Science
8.7.2022 11:00 AM
Webb Telescope discovers an “amazing” galaxy from the edge of time
By LAURENCE TOGNETTI and Universe Today
Science
8.6.2022 11:00 AM
450 million years ago, Earth’s magnetic field almost collapsed — the results would have been apocalyptic
By CAROLYN COLLINS PETERSEN and Universe Today
Related Tags
Share: