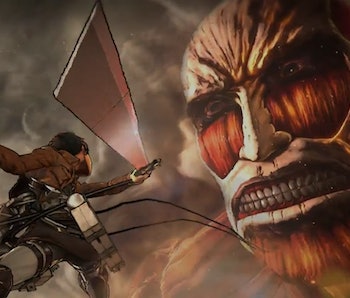 When I sat down with the Japanese video game developers, Koei Tecmo, about their upcoming video game based on Attack on Titan, I had one question in mind: “Did you know the show would be as popular as it was in the West?” Their response was a little surprising, “We didn’t realize it was even that popular here in America.”

In 2013, an Attack on Titan debuted and changed the popular perception of anime in popular culture. The show was exceptionally macabre, the character design was decidedly anti-anime (women were correctly proportioned, male leads were decidedly not handsome), and popular characters were killed off. It was quickly dubbed the “Game of Thrones of anime”.

While that comparison isn’t a 100 percent accurate, it gives a pretty good idea of why the anime was so popular, even with non-anime audiences. The show avoided many anime tropes, and even more of the things that make anime “weird” for non-viewers. Instead, Attack on Titan delivered an action-heavy drama in which humanity harnesses the power of steampunk weapons to fight against monstrous, cannibal giants.

Attack on Titan follows Eren Jaeger, who, after the destruction of his village and murder of his mother by the titans, joins an elite group of titan hunters. The game recreates the first season of the anime series, allowing players to play through key story moments from the series, while combating large Titans through the show’s patented zipline-style combat.

When I sat down at E3 to check out the game, I was impressed. The game looks like a perfectly respectable third-person action game which accurately captures the manic pace of the anime. It honestly plays a lot like the Spider-Man video games from Activision. Talks of the game quickly took a different turn when producer Hisashi Koinuma asked me (via his translator) what it was about Attack on Titan that made it so popular in the America. Our conversation morphed into a discussion on the post-modern sensibility the series shares with HBO’s Game of Thrones series.

Like finding out that David Hasselhoff is incredibly popular in Germany, culture enthusiasts in Japan might no be aware which one of their cultural imports gain traction in the states, and for what reason. So discussions about both show’s violence, willingness to play with established narrative tropes, and Attack on Titan’s crossover appeal dominated our preview. We talked about why the show’s grizzly violence might appeal to Western audiences, and whether or not Game of Thrones could perform well in Japan. We even discussed some passing similarities with the game’s rooftop-jumping mechanics with that of Batman and Spider-Man’s.

Attack on Titan will release this August for all major gaming platforms. Fans of the anime, as well as fans of third-person action games will do well to check out the game when it launches. I, however, will forever remember this preview as a day I spent as a cultural ambassador with curious and like-minded enthusiasts from Japan.

Koinuma has a lot to be proud of; Attack on Titan is an exceedingly playable adaptation of a series that has captured both Japanese and American audiences. Though a direct comparison to similar Westernized stories escapes him, his work in the franchise demonstrates his understanding of what excites all of us: memorable characters fighting in high stakes situations. That thrill translates across cultures.