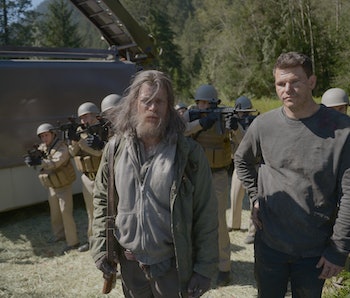 The second season of Wayward Pines is a distinctly different than the show’s first year. The eerie, David Lynch-like atmosphere is gone, favoring a more general zombie show within an Orwellian setting, but it references the days of Ethan Burke any chance it gets. Last week the showrunners killed Pam, and now Adam Hassler (Tim Griffin) wanders back along with an untouchable Xander (Josh Helman), both with the knowledge that the Aberrations are more than animals — they’re a hive mind, and the replacements for mankind in the new Earth.

Hassler, Ethan’s former boss at the Secret Service, doomed Ethan and his family to the town, despite protests to Pilcher in a flashback during Season 1 (which the series smartly replayed in its catch-up prologue). Hassler went missing as a part of a scouting crew sent by Pilcher, but he was the last survivor found by Xander, who was also locked outside the town’s fence at the end of last week. Waking up in a pit, Xander discovers the Abbies aren’t merely savage predators. They’re methodical, and there’s something to learn from them – if they can only get close enough, that is.

Back in town, Xander is welcomed as a hero despite the efforts from Jason (Tom Stevens) and his partner Kerry (Kacey Rohl) to kill him for his betrayal as an inside man for Ben. Ben’s dead now, there’s no rebellion to fight for. Xander has no option but to keep his head down and scoop corn-flavored ice cream.

The town is running out of food. The show is running out of its originality from Season 1, and is turning to other post-apocalyptic shows like Battlestar Galactica and The Walking Dead to sustain itself. The cast of Wayward Pines is getting crowded; as minor faces suddenly becoming more important, like the two siblings who work for Yedlin’s wife Rebecca (Nimrat Kaur) thrust to the show’s center to explain the town’s treatment of its adolescent females as baby factories. It’s great that Wayward Pines is exploring other corners of its complicated world, but how its going about it isn’t particularly engaging or gripping. We get it, it sucks that children are forced to bear children. But can we explore its more important themes of free will and liberation than through “I don’t wanna”?

Wayward Pines is still a good show, but it’s biting off more than it can conceivably chew in a series built on mystery and suspense. We know a little more about the world in and outside the fence — Hassler hints the scouting efforts proved that Wayward Pines is all that’s left of civilization — but it’d be great if the show can do a little more to make that world compelling.