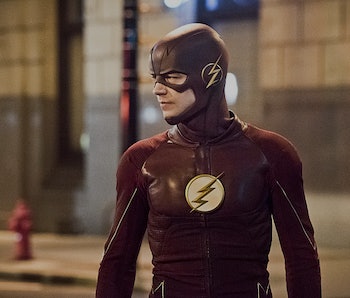 Barry Allen did the unthinkable at the end of The Flash Season 2. He traveled back in time and stopped his mother Nora’s murder by the Reverse-Flash, the event that led him to becoming a superhero. Anyone with a passing familiarity of time travel knows messing with history can alter it, often for the worse. Barry knows this better than anyone — his comics counterpart did the exact same thing, in DC’s Flashpoint.

While we’ve already explained Flashpoint and what it could mean for the next season of The Flash (in short: hella bad things), the ongoing “reboot” at DC Comics, Rebirth, may also offer a glimpse as to what the third season of The Flash could look like. While DC keeps its comics media properties mostly separate, unlike Marvel, there’s undoubtedly symbiosis at play.

Here’s the low down: Flashpoint changed the DC Universe in 2011, setting it free from decades of continuity before it. DC’s mission was to simplify its comics to welcome in new readership, and dubbed these new books “The New 52.” While some of its books were great, the New 52 was mostly a disappointment since it dropped a lot of elements fans loved (i.e. Green Arrow and Black Canary’s relationship). This year’s Rebirth is undoing that, re-integrating the New 52 continuity with the old.

In the story, Flash is responsible for causing the event when he went back in time to stop Reverse-Flash from killing his mom, setting off a domino effect (sound familiar?). But as revealed in Rebirth, he was compelled to do so by Doctor Manhattan, the nuclear superhero from Alan Moore’s seminal Watchmen. You can bet none of the Watchmen stuff will make it in The Flash, but what could Rebirth still mean for Season 3?

The Flash Season 2 was very much about family, and friends who bond as one. There’s Joe West, Iris, Wally, Cisco, Caitlin, Oliver Queen, Felicity, Diggle, Jax, Professor Stein — hell, even Earth-2 Harrison Wells and Jesse. And Captain Cold, while we’re at it. There was great effort to establish that these kooky nerds and ripped vigilantes fighting for or by Barry’s side. It was no more apparent than in the payoff of the mysterious masked man’s identity: the real Jay Garrick, the Earth-3 doppelgänger of Barry’s dad Henry.

So Barry has family who loves him. Now what if they forgot him?

In Rebirth, it’s Wally West, a.k.a. Kid Flash, who had been sacrificed and forgotten. Wally resurrects himself from being a ghostly presence in the Speed Force when Barry remembers him (in DC’s Rebirth #0). In this week’s Titans: Rebirth #1, Wally reunites with his Titans, who also remember him via contact with his Speed Force (because in case you haven’t realized, this is comic books).

That sounds like an easy story to give to Barry, who may be trapped in the Speed Force after altering his own story. I have no idea what’s cooking in the writer’s room, but what kind of time-paradox is made when you stop the event that gave you the ability to change it in the first place? This season, Barry found himself within the Speed Force, so it’s established it’s a place that could be his punishment for Season 3 — until he finds a way for people to remember him as the Flash again.

Flashpoint is no doubt the dominant influence on The Flash Season 3, but to what extent remains to be seen. In Flashpoint, the DC Universe was radically different: Batman was Thomas Wayne, Wonder Woman and Aquaman were quarreling ex-lovers, and Cyborg was the world’s greatest superhero. Though DC’s Arrowverse sports less superheroes than its comics inspiration, easily it could make Robert Queen the Green Arrow instead of Oliver, or Ray Palmer’s Atom as the world’s finest. Either way, there isn’t going to be a speedster like the Flash.