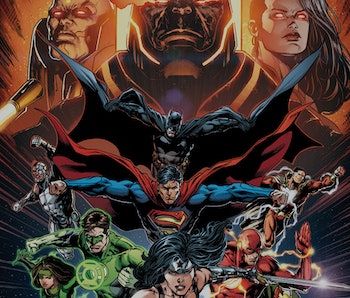 After a few weeks of speculation and downright confusion, comic book giant DC Comics unveiled the full plans for “Rebirth” and what it means at ComicsPRO, the retailers-only conference in Portland.

As explained by DC’s Chief Creative Officer Geoff Johns, Rebirth is the publisher’s summer initiative to remap its sprawling comic book universe of superheroes. Unlike the last time DC pulled a move like this — in 2011, the publisher wiped decades of continuity clean in a reset called “the New 52” — DC says this time it’s honoring and preserving legacy.

Rebirth had a mixed reception by the retailers in attendance, according to Bleeding Cool, but there is optimism that the publisher, waning behind direct rival Marvel and other imprints in industry clout and book sales, is on the right track.

Here’s what you need to know about Rebirth:

“It’s not about throwing anything away,” Johns told Comic Book Resources in an exclusive interview. “It’s quite the opposite.”

In a lengthy one-on-one Q&A, Johns walks through the process of Rebirth and exactly what it means for the future of DC. Throughout the article, you get the hint that DC is trying to win back favor from both fans and retailers dissatisfied with the New 52. (On a personal note, I enjoyed quite a bit of the New 52.)

“It’s not just going back to square one. It’s much, much more than something that simplistic,” Johns told CBR. “We all need to do our best to get this right and everyone has come together to create a cohesive universe and terrific stories that work individually as well as together. We’re also doing it by building on everything that’s been published since Action Comics #1 up thru [sic] the New 52.”

A previous understanding of Rebirth was that it would tailor DC’s line-up to better reflect its live-action TV and movies, which is set to really get going when Batman v Superman: Dawn of Justice releases in March. In the interview, Johns dismissed this notion:

“I know people have been talking about, ‘They’re going to make the comics like the TV shows or the films!’ Why would we do that? These aren’t licensed comics. That’s boring. We already have TV and the films. And those are great. But comics are their own thing. … If there’s something interesting that we see in film or TV that we want to nod to or bring over, we do it, but it’s really much more focused on the comic books.”

Of note is CBR’s exclusive video where Geoff Johns talks about Rebirth, and it’s not because of what he says. The still image shows silhouetted characters against a blue curtain. There is a female Green Lantern character, two members of the Superman family, an evil-looking Flash character, a hooded figure, and one wearing a helmet not unlike Jay Garrick’s — the Flash of Earth-2. These are definitely new characters who will no doubt have a significant presence in the next era for DC.

Below are the scheduled releases, and Johns isn’t entirely wrong about Rebirth being independent from DC’s successful TV shows and movies. To my surprise, John Constantine will keep his book, albeit from a different name from the ongoing Constantine: The Hellblazer. There are also non-TV and non-movie characters like Blue Beetle, Superwoman, and Red Hood who are getting or keeping books, but have nothing as far as a live-action adaptation goes.

Below are all the books that will launch and when, from the press release:

More like this
Entertainment
2 hours ago
Frankenstein is returning to the Hellboy universe in a post-apocalypse adventure
By Jeff Spry
Entertainment
5.4.2022 12:43 PM
Moon Knight ending explained: What’s next for Scarlet Scarab and more?
By Jake Kleinman
Entertainment
5.2.2022 4:00 PM
From Star Wars to Alien, Hatching’s creature designers make iconic monsters
By Isaac Feldberg
Share: