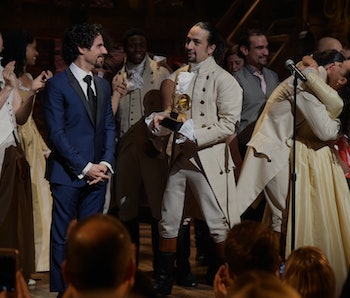 After a year and a half on stage, the Broadway musical Hamilton has infiltrated every corner of pop culture. The play is nominated for 16 Tony Awards and creator Lin-Manuel Miranda has been popping up in Star Wars spin-offs and Harry Potter stars’ outreach campaigns. The only problem with Hamilton is that nobody gets to see it.

That’s a bit hyperbolic, of course — some people do get to see Hamilton, but it’s not exactly easy. Tickets for this weekend’s shows are scraping $1,000 at the cheapest on Stubhub, one of the most popular ticket re-selling sites, and the show is completely sold out from the official vendor months in advance. You can sign up for the daily lottery, but unless you’ve put down $139 for a standard ticket months in advance, you’re not getting anywhere near the show without going through a third-party vendor, whose prices are much higher than retail.

When tickets for Hamilton go on sale, scalpers have an army of specially-programmed online bots that buy the tickets in bulk, who then re-sell them on sites like StubHub, as Miranda explained in a New York Times op-ed recently, titled “Stop the Bots From Killing Broadway.”

It’s a messed-up system that affects almost every live-entertainment industry, but it’s particularly ironic when the rampant capitalism ruins a play about one of the nation’s foremost economic theorists. Miranda is definitely pissed, but how would Alexander Hamilton himself feel about ticket bots?

Turns out, the answer isn’t all that simple. Hamilton was Secretary of the Treasury to George Washington, and had a hand in nearly all of the fledgling republic’s economic policies. He was in charge of turning a resource-rich but war-weary country into a functioning part of the global economy, getting rid of a ton of national debt, and invigorating business in the newly-independent colonies. Inverse called up David Weiman, the Alena Wels Hirschorn Professor of Economics at Barnard College, to ask him what Hamilton would have said about the ruthless ticket bots.

According to Weiman, what the ticket bots are doing is a form of speculation — essentially, gambling that people are going to want something, and putting down a whole lot of money on that thing, knowing that demand will make their value skyrocket. The creators of Hamilton have tried to set a flat price for tickets, which keeps things reasonably fair for the public, but the bot’s speculation makes Hamilton-heads vulnerable to the harsh laws of supply and demand.

Weiman says that in general, Hamilton was a large supporter of speculation. After the revolutionary war, the United States had a huge amount of public debt. One of his biggest moves while shaping the new country’s economic policy was to allow public companies and investors to speculate on debt, buying it up at lower prices than it was worth in the hope that when the economy recovered, it would get paid back in full and they’d make money.

“He must have certainly been aware that if his policies were enacted that [investors] would stand to gain enormous profit from his transactions,” Weiman says. “He saw that this would empower an entrepreneurial class.”

Essentially, Hamilton was okay with redistributing a large amount of the nation’s wealth in the name of capitalism, through speculation, to get the American economy back on its feet. But the problem is, that’s not exactly the same situation as the speculation that’s letting Stubhub rake in the cash on Hamilton tickets.

“He was not necessarily condoning speculation,” Weiman says. “But his assumption was that this speculation would be productive.”

The speculation over Hamilton tickets isn’t even a gamble at this point — people are clearly willing to pay the astronomically increased prices to get their fix of Miranda’s infectious hip-hop rendition of American history.

Weiman says Hamilton consistently advocated for a strong central government and financial regulation to protect people from rampant capitalism, like the massive speculation in the housing market that nearly destroyed the economy in 2007. Unfortunately, Hamilton himself isn’t around to set the record straight, because (spoilers for Hamilton and also U.S. History), Aaron Burr shot him in 1804.

Until we figure out how to raise the dead or change the legislation surrounding online-ticket purchases, the bots will continue to run rampant along Broadway.