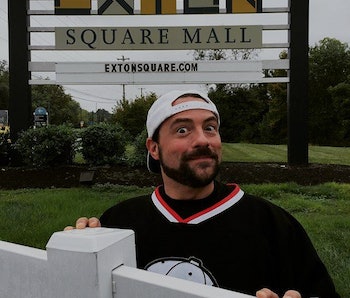 Eternal Jersey boy Kevin Smith has begun production of MallBrats, the sequel to his 1995 sophomore effort Mallrats, but now, since it’s 2016, the sequel has morphed into a 10-episode series.

Announced as an “exclusive” on the Twitter account of the Philly-based radio show The Preston & Steve Show, Smith is pictured posing with his signature wide-eyed grin in front of the Exton Square Mall in Exton, PA. It’s the same photo Smith posted on his Facebook a few months ago, announcing the location after the original set, the Granite Run Mall in Middletown, PA, was to demolish before production could get off the ground. Filming for MallBrats is “TBD,” although it was initially scheduled to begin in January 2016.

A sequel to Mallrats has been on Smith’s back burner for years, and it was all but guaranteed to be a movie, and not a 10-episode series. He’s openly discussed following up Mallrats but other projects, like his Canadian comedy horrors Tusk and Yoga Hosers have taken precedence. Smith also took up directing duties for an episode of The Flash on the CW.

Smith had long said he’d make Clerks III, the third entry in his Clerks series that began his career before a sequel to Mallrats. But the impending demolition of Granite Run made the Mallrats follow-up “a priority”, even though Granite Run wasn’t the film’s location in the end.

A release date for MallBrats – or even on what platform the show will premiere – has not been announced.