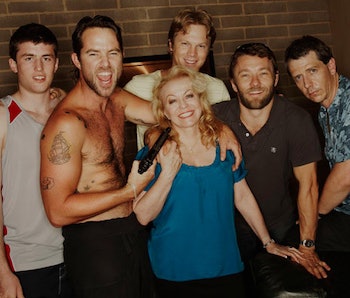 Intellectual property is the name of the game for media companies now; just about any older movie with any sort of name recognition has been considered for a reboot by now, and more recently, old TV shows have been scaled up to the big screen (with mixed results for anything not called Jump Street). Over the last few years, TV networks have been working on a new approach to capitalizing on even faintly recognizable titles: taking semi-obscure movies and turning them into tangentially related or thematically similar TV series.

The thinking goes that a potential viewer is more likely to tune in to a show with some sort of built-in certainty, but the jury is still out on the success of this strategy. Syfy is in the second season of a 12 Monkeys TV show, while MTV is giving Scream another try. Movies that don’t necessarily need TV adaptations but get them anyway can only be as good as their source material, which is why TNT’s upcoming TV adaptation of the 2010 Australian crime drama Animal Kingdom has a lot of potential.

The little-seen but still critically lauded movie by writer/director David Michôd landed a Best Supporting Actress Academy-Award nomination for Jacki Weaver, and provided Michôd with an introduction to Hollywood that led him to making the under-appreciated 2014 dystopian future anti-western The Rover and Netflix’s upcoming Brad Pitt-starring War in Afghanistan satire War Machine.

Animal Kingdom isn’t exactly the hottest property out there. It only made $6 million at the worldwide box office, and the fact that TNT’s show — which trades the movie’s Melbourne setting for the California coast — is adaptation at all might come as a surprise to most people who see the previews on TV. So why bother to make a small Australian movie into a TV series? The hook lies in the film’s concept.

Set in the suburban Australian underworld, Animal Kingdom tells the story of 17-year-old Joshua “J” Cody (James Frecheville), who goes to stay with his grandmother Janine “Smurf” Cody (Weaver) after his mother dies of an overdose. Smurf is the loving but ruthless matriarch of the Cody crime family, made up of the naive younger brother Darren (Luke Ford), hotheaded middle brother Craig (Sullivan Stapleton), trusted confidante Baz (Joel Edgerton), and volatile outlaw older brother Pope (Ben Mendelsohn). In a laconic voiceover, the dimwitted J, who remains an audience surrogate throughout much of the movie, recounts his gradual passive assimilation into the aggressively male inner circle of the family’s low-key local empire.

The Australia of the movie isn’t anything like the Crocodile Dundee stereotype, resplendent Kangaroo-filled tourist paradise, or the Mad Max dystopian outback that many American viewers would recognize. Instead, the grimy, realistic portrayal of the setting reflects the dirty business in which the group participates. This Melbourne is a place where the police force is as merciless as the crooks themselves, which culminates in the shooting deaths of two local police officers after Baz is gunned down by a band of corrupt cops. Eventually J finds himself in the middle of a turf war between the Codys and different factions of the Melbourne police force, the most law-abiding of which is led by a straight laced lieutenant played by Guy Pearce.

At its best, Animal Kingdom hits all the beats of iconic mafia stories: family, honor, respect, and whether or not you can rat out the ones you hold dear. The dynamic is like a Down Under and contemporary version of the BBC and Netflix series Peaky Blinders, another story about getting used to your family doing some very bad things. Though it only has a runtime of just under two hours, Animal Kingdom goes through these events at a glacial and truthful pace, almost as if it was cut down from a long miniseries.

The film uses stretches of simple exposition-free familial interactions to help audience discern for themselves the power dynamics within the family, and those scenes are punctuated by gruesome moments of supreme violence. It makes the uncomplicated storyline even more powerful, and means the movie is defined by what isn’t there.

The movie strikes an adequate balance between showing too much and too little, but most importantly for the TV adaptation it’s here where the idea that this story could be expanded in a legitimate series begins to emerge.

The skeleton of a long, fleshed out story is there. While it could potentially take away from the minimalist mystery of Michôd’s crime family creation by over-elaborating, hour-long episodes at least give the Codys some breathing room to get up to no good. While the show will inevitably add some unneeded California surf bro flair, Animal Kingdom’s potential lies in filling in the blanks.

It’s a crazy fucking world, Pope says, lamenting the fact that they beat the system before J ultimately assassinates him in the movie’s downbeat climax. While Animal Kingdom doesn’t necessarily need a TV adaptation, it’ll be fascinating to see just how crazy it gets on the small screen.