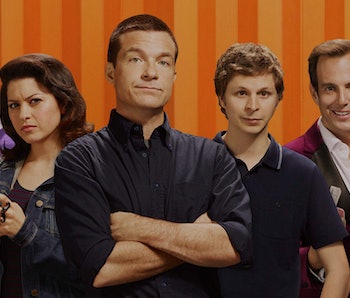 According to a (totally unconfirmed) YouTube video released just a few moments ago, Netflix is on board for another season of Bluth family anarchy. The video shows the entire trailer, from a suitably covert camera angle, which culminates in the exciting news that — if it’s legit — Arrested Development season 5 is slated for release in January of 2017.

The question remains as to how exciting this news will be to fans of the series. While the first three seasons of the cult-hit were an undeniable smash with both critics and the four people who actually watched Arrested Development while it was on the air, season 4 didn’t fare as well. By eschewing the typically clustered plot lines of each episode in favor of individual episodes that focused on one or two of the Bluths, a lot of the show’s spark and snappy wit was lost.

About the nicest thing that diehard fans could [say about last season was],(http://www.tvguide.com/news/arrested-development-season4-review-1066092/), “it gets better.”

Of course, that’s no reason to assume that Hurwitz isn’t up to the task of returning his Bluths to their former glory. While there’s no information on a plot at this point, one can only hope again, assuming this information is real — that Huritz is ready to toss his cast of oddballs into the spotlight at the same time once again.