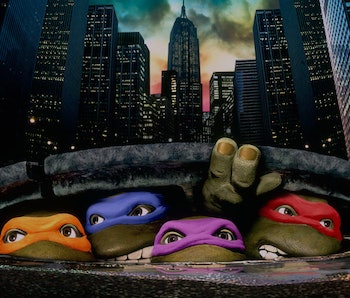 The famous tagline of director Richard Donner’s original Superman movie was “You’ll believe a man can fly.” The tagline for the 1990 Teenage Mutant Ninja Turtles movie should have been something like, “You’ll believe anthropomorphic adolescent reptilian monsters could be teenage mutant turtles that practice ninjutsu.” It doesn’t quite roll off the tongue in the same way, but it gets the general point across.

The first big-screen adventure of Leonardo, Donatello, Michelangelo, and Raphael remains the most pure. It’s the perfect distillation of every iteration of Kevin Eastman and Peter Laird’s absurdly enduring creation, from past and present. With hints of the dark, adult-oriented beginnings of the comic books and the goofy farce of the popular, late-’80s cartoon, director Steve Barron’s Teenage Mutant Ninja Turtles finds a perfect balance that is both of its time and timeless. Most importantly, it holds up even today when a slick, new, purely CG teenage turtle adventure sequel is ready to fight its way into theaters.

Perhaps the most surprising thing about re-watching Teenage Mutant Ninja Turtles is just how dark it gets. Somehow, Barron makes the grimy depiction of a decaying New York City feed into the potentially goofy underlying story of the city being overrun by a band of masked men called the Foot Clan. By extension the smokey manhole covers, shadowy alleyways, and unsafe, crime-ridden streets somehow paints a real enough picture of the Ninja Turtles to ground the movie. It’s enough to allow the audience to suspend disbelief at the ridiculousness of what they’re watching. When the first clear words uttered by the hot-headed hero Raphael is a full fledged utterance of the word “Damn” — itself not an earth- shattering expletive, but still surprising for a supposed kids movie — you know we’re operating in a bizarre middle ground, here.

Add to that scenes like a tortured and bloodied Master Splinter at the hands of perennial Turtle villain Shredder (who is also ridiculously goddamn scary), Raph getting pummeled by the Foot into a kind of coma for half the movie, and heroine April O’Neil being attacked in a darkened alley and left for dead if it wasn’t for the Turtles and it begins to sound like the bleak tone of this movie is more akin to Taxi Driver than inspired by Saturday morning animation. This movie is essentially about dealing with the potential death of your father. But thankfully the playful banter between the Turtles, especially Michelangelo and Donatello’s bevy of pizza-related wisecracks, as well as the unavoidable catchphrases of “Cowabunga,” tend to bring the levity back.

Its a clever and potentially dangerous choice. If writers got too grimy, the movie would have driven away the fanbase of kids that made the Ninja Turtles into a pop culture phenomenon. Become too cartoony and it would have made it unnecessary for parents to haul their kids to a theater when they could have just plopped them in front of the TV to watch the actual cartoon. The key to these decisions is context.

Teenage Mutant Ninja Turtles is purely a product of the uncompromising atmosphere of New York City in the 1980s, where it was actually unsafe to walk alone at night for fear of being attacked by someone or something. The movie takes that very real fear to enable the film’s realism, but uses the nonstop reptilian puns to never let you forget that it’s about mutant turtles who fight. It’s as gritty as it is kiddie.

Tone is one thing, but technical ability is another. This Teenage Mutant Ninja Turtles movie didn’t have the luxury of performance-capture CGI, and instead, the Jim Henson-created animatronic foam rubber latex Ninja Turtle suits also help with that balance. They’re not perfect, the mouths don’t move with the dialogue at certain points and you can kind of see where the seams are hidden between their shell and skin. But they’re tangible and real, and the murky, almost German Expressionist lighting of the film meant to hide those imperfections only adds to the idea that against your better judgment you’re watching something that’s exaggerated but still actually there. This is why the absurdity seems to work here, and not in the 2014 reboot.

The Ninja Turtles are supposed to be as mysterious and alienating as they are hilarious jokesters, and keeping your mind filling in the blanks by not completely showing them in every shot is why the 1990 movie is the best big-screen depiction. It’s what the new movies don’t seem to understand because it’s all about showing off the inexorably expensive CGI. The reboot sequel is actually titled Out of the Shadows for crying out loud. The 1990 movie might as well have been subtitled Back into the Shadows, because that’s where ninjas — especially of the teenage mutant turtle variety — belong.

Context might work for the movie but also work against it, especially when you have a nostalgic eye for the movies you grew up watching. The 2014 reboot was seen as critical garbage, but so was the 1990 version. In his grade-F review in Entertainment Weekly, critic Owen Gleiberman said:

“The essential question surrounding Teenage Mutant Ninja Turtles is ‘Will kids go for it?’ The answer, I suppose, is yes — but then, I might have gone for it too had I been raised on Nintendo games and the robotic animation that passes for entertainment on today’s Saturday-morning TV. I don’t mean to get all baby-boomer nostalgic on you, but remember when entertainment for children had soul?”

This could have just as easily been about the reboot, or the allegedly mindless excesses of Out of the Shadows. But in retrospect, Gleiberman’s comments about the original essentially highlights why the Ninja Turtles are an impossibly evergreen idea that can be constantly reimagined and enjoyed by new generations. Its themes of brotherhood, alienation, family, and teamwork come in many CGI shapes and non-CGI sizes. But as long as you can throw away some cynicism and yell “Cowabunga,” you’ll love being a turtle no matter what movie you’re watching.