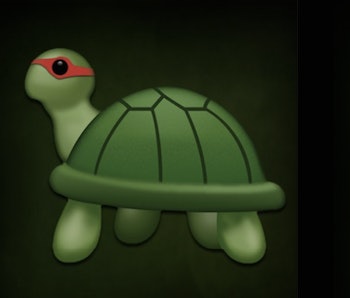 How did you celebrate your #TurtleTuesday? For the vast majority of us we woke up, ate a hearty breakfast, marched into work, and tried to have a great day in advance of going home, falling asleep, and waking up to do the whole thing again. Other people who are fans of four fictional teenage anthropomorphic turtles fired up their computers to check Twitter and found a handful of new minimalist posters for the new movie Teenage Mutant Ninja Turtles: Out of the Shadows.

Out of the Shadows is the sequel to the Michael Bay-ified 2014 Ninja Turtles movie, which was a surprise success at the box office, raking in nearly half a billion dollars at the worldwide box office. It seems Leonardo, Donatello, Raphael, and Michelangelo have multi-generational appeal even when they appear in a fairly crappy origin story starring Megan Fox and Will Arnett (for some reason).

But the problem at hand are the individual posters, which are emojis that trade off the turtles’ iconic multi-colored bandanas. It’s a nice little marketing move, trying to catch the eye of those cash-spendin’ millennials by being social media savvy. But they’re mostly there to try to trick people into forgetting that the new turtle character designs for the new Ninja Turtles make them look like heinous and gigantic green monsters.

Refresh your memory with these other character posters that debuted earlier this month:

Whatever happened to the cartoon-y turtles? Oh, well. Teenage Mutant Ninja Turtles: Out of the Shadows hits theaters on June 3.