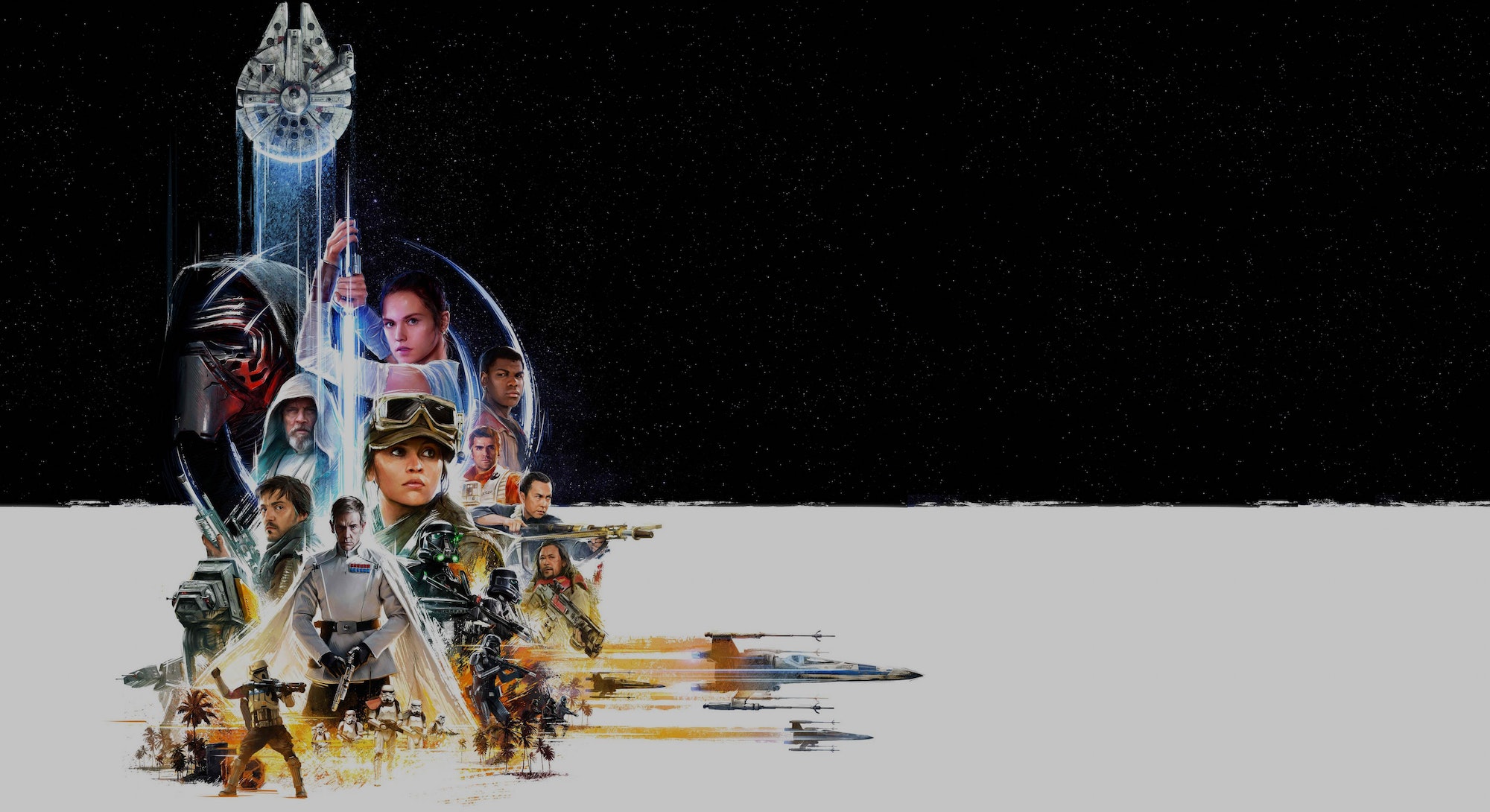 This year’s Star Wars celebration is going to be great. At this point, before the big two-day fan event taking place in London starting on July 1, we’re just at the beginning of the new Star Wars movies really settling in. Director Rian Johnson is hard at work at a Force Awakens follow up for 2017, and we’re heading into the first standalone movie, Rogue One, about to be released in December 2016. Everything is in flux, and that’s a good thing.

But fan fervor can be an unexpectedly blinding force. You forget that even though these movies make billions of dollars, it doesn’t mean every single audience member is a super-fan tuned-in to every single storyline in the increasingly sprawling saga. The ridiculously gorgeous art for the Star Wars Celebration is a perfect example of that.

Rogue One looks like it’ll be a phenomenal movie. We’ve only seen a two-minute-long trailer and it’s already obvious that director Gareth Edwards perfectly embodies the lived-in aesthetic of George Lucas’s 1977 original with a contemporary twist. But the problem seems to be where it falls within Lucasfilm’s grand scheme of things. Star Wars fans are undoubtedly psyched to get more movies for the foreseeable future, doubly so because the creative and financial success of The Force Awakens means we didn’t have to live through another lackluster prequel situation for the time being. One of the strengths (or weaknesses depending on who you ask) of J.J. Abrams’s movie was that it did its thing both ways. The Force Awakens kickstarted the Star Wars story 30 years later, but was essentially a rehash of the first movie. It welcomed the new audience in and also made the super-fans feel welcome. Rogue One has a different goal.

Star Wars fans know exactly what’s going on with the slightly convoluted timeline of these movies. For a refresher: The first three chronologically take place after George Lucas’s prequels, and the new trilogy of movies will take place after the first chronological trilogy. But now theres also going to be standalone movies scattered throughout the Star Wars timeline that upsets the trilogy-based rhythm audiences expect.

Granted, regular audiences probably don’t care about when exactly these take place in the grand scheme of the saga. Thats for the nerds to figure out. But it’ll be easy for a general audience to assume that since Rogue One is getting a release almost a year to the day after The Force Awakens that it’s simply a continuation of the story. This isn’t to say general moviegoing audiences are idiots that can’t pick up on story details, characters, and timelines. It is to say that Lucasfilm’s approach could lead some to get confused enough to make that mistake. Case in point: The Star Wars Celebration art that blends together imagery from Rogue One and The Force Awakens.

The art is ostensibly the perfect amalgamation of cinematic universe synergy. It represents an event whose sole purpose is to fawn over the movies it depicts while also attempting to introduce people to new details about the upcoming movie people want to celebrate. It is, admittedly, awesome. Shoretroopers, the AT-ACT, and the Death Troopers are enough to set any Star Wars fan’s head buzzing. But what about people that just watch the movies for entertainment and don’t get caught up in hopelessly minute details? They’d suddenly equate these images with that Kylo Ren dude that killed Harrison Ford, and get that one character with the lightsaber mixed up with that badass looking character wearing combat goggles. This is why the image sets Lucasfilm’s awareness for Rogue One back. It’s already confusing enough to try and introduce people to a prequel that has no bearing on the seven other movies they hopefully watched. It’s another thing to put the two newest ones together in a slick poster design to make it seem like they’ll be hanging out on-screen with one another.

This could all be the rambling of a Star Wars fan curious about how their own beloved franchise of movies will be accepted by the public at large. The Force Awakens did alright for itself, so there’s probably no need to worry about some fan-centric poster design for a relatively niche-but-still-pretty-goddamn-popular convention. Lucasfilm obviously wants to be inclusive to their viewers, but heading into Rogue One it’ll be fascinating to see how they introduce the complicated timeline into an already complicated mythology. Hopefully the Force, and some marketing savvy, is with them. It hasn’t failed them yet.