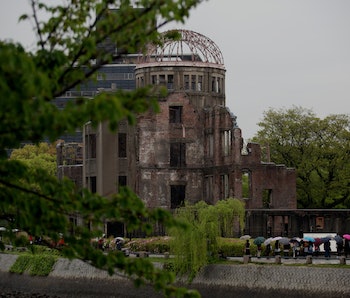 On Friday, President Barack Obama will become the first sitting American president to visit the Hiroshima Peace Park, a memorial to the victims of the cataclysmic WWII nuclear attack. Unlike Chernobyl, a city still devastated by nuclear fallout, Hiroshima is alive and well, with background radiation levels more or less equivalent to anywhere else on earth. Not all nuclear explosions are created equally.

The initial shock of radioactivity from “Little Boy,” the atom bomb dropped on Hiroshima, was huge, but the fallout dissipated relatively quickly. The 9,000-pound uranium-235 bomb dropped by the Enola Gay exploded 2,000 feet above the city, where it was thought it would induce maximum damage.

The blast itself was caused by nuclear fission — that is, the rapid, energy-expelling breakdown of atoms — of about 2.2 pounds out of the 141 pounds of uranium it contained. The explosion reached a scorching 3,600 degrees Fahrenheit and sent intense rays of heat two miles outside of the bomb’s hypocenter — killing, by one estimate, approximately 66,000 people in a fiery instant.

But because the bomb was detonated in mid-air, the leftover radioactive debris, atoms that broke away from the initial uranium, was less likely to embed itself in the earth. Instead, much of it was blown away by the force of the erupting mushroom cloud, which is one of the reasons why Hiroshima residual radiation was so limited. As radioactive debris continues to break down, it keeps releasing bursts of radioactive energy, but it’s not nearly as harmful when it’s up in the air. It’s thought that the 90 percent of uranium that didn’t undergo fission in the bomb blast rose to the stratosphere — where some of it came back down as “black rain” — but most of it dispersed.

We can estimate the rate at which radioactive materials decay (and thus give off radiation), but the decline in radiation at Hiroshima isn’t well documented for multiple reasons: It was unclear how much material actually fell because there wasn’t data being collected and the character of the radiation (was it emitting the usual gamma rays, or neutrons?) remains unknown. Still, the radiation that made its way into the Hiroshima soil was deadly: Approximately 1,900 people are thought to have died because of cancers caused by exposure to radiation, and countless others suffered disorders such as keloids, cataracts, and intestinal bleeding.

The explosion at Chernobyl in 1986 initially killed far fewer people than the Hiroshima blast, but the number of deaths that followed after years of exposure to residual radiation was incredibly high. Scientists are still debating whether the number is closer to 10,000 or 1 million. By the IAEA’s estimate, the Chernobyl blast expelled 400 times more radioactive material than Little Boy. Considering that the Chernobyl explosion involved the detonation of 13 pounds of the much more dangerous plutonium and 160 tonnes of nuclear fuel, its safe to say that it was an explosion of vastly different proportions. On top of that, Chernobyl’s nuclear meltdown happened on the ground, not up in the air, making it easier for radioactive debris to pummel into the soil, where it continues to break down and release radiation today.

Hiroshima’s Peace Memorial Park is a destination for tourists interested in history, while Chernobyl attracts a different sort of tourist.

“Today, the background radiation in Hiroshima and Nagasaki is the same as the average amount of natural radiation present anywhere on Earth,” reads official documents from Hiroshima Peace Park. “It is not enough to affect human health.” Meanwhile, Chernobyl’s guided tours promises to take tourists to areas where they won’t be bombarded with radiation, but the official Chernobyl Exclusion Zone remains to dangerous to visit.

The easiest way to think about sad fates of both spots may be to invoke that oldest of laws: Newton’s first. When radiation is in motion, a city gets another chance. When it isn’t, it doesn’t.