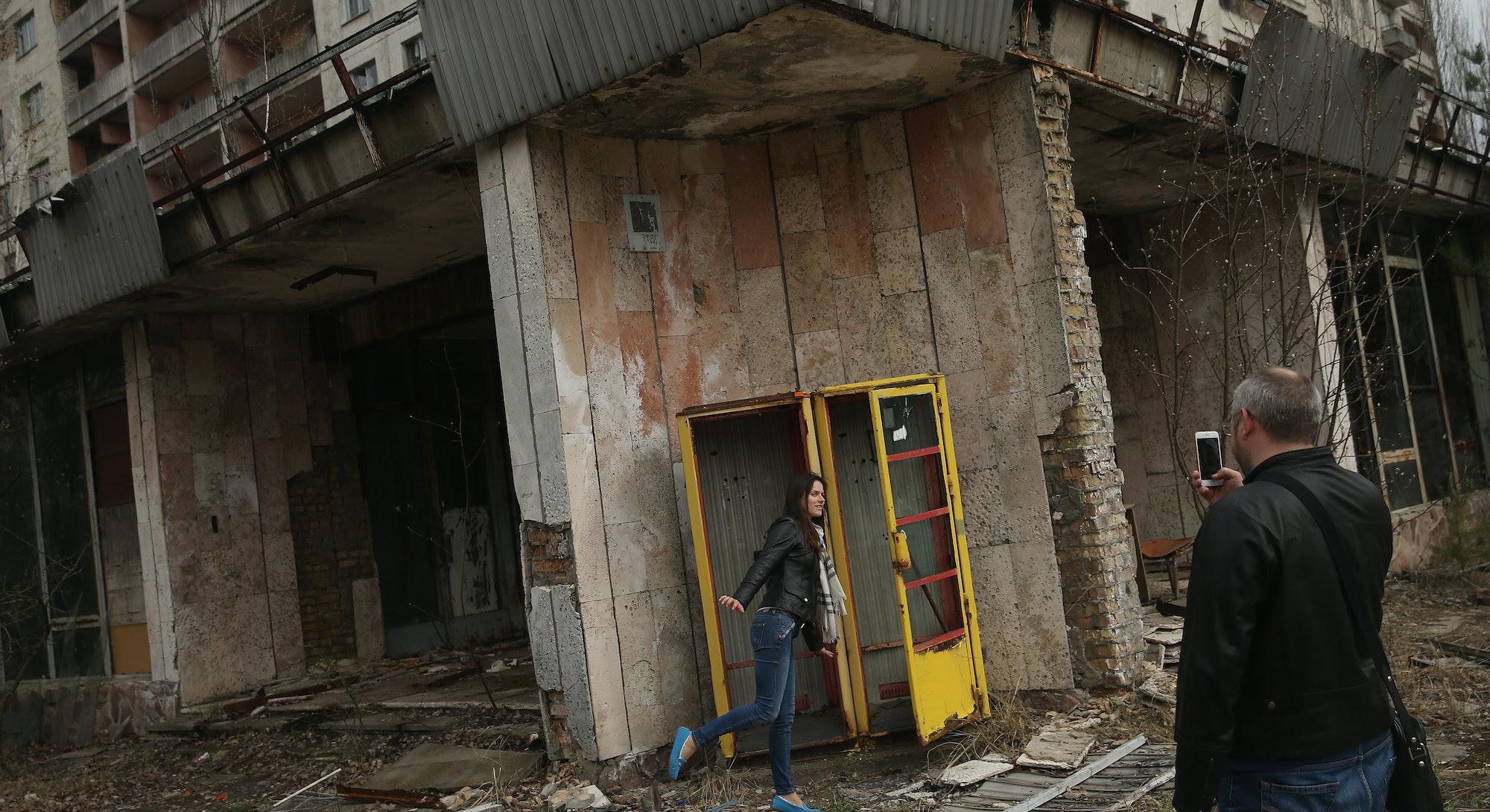 At 1:23 a.m. local time on this day in 1986, an explosion at the Chernobyl nuclear power plant in the former Soviet Union, caused after a routine shutdown went awry, killed 31 people immediately — but its aftermath has spanned three decades.

Panicked workers and nearby residents fled the fallout zone, located in the center of present-day Ukraine, near its border with Belarus, about two hours north of Kiev. They abandoned the plant and the nearby villages, leaving everything (many were told they could return in three days to collect their belongings) to the ravages of radioactive contamination.

After three decades, Chernobyl’s Exclusion Zone — an 18-mile radius encircling the most contaminated areas around the plant — is abuzz with life as disaster tourists, propelled by adventure and morbid curiosity, flock in daily by the busload.

As the risk of radiation sickness diminished over time, tour companies like SoloEast Travel and the creatively named Chernobyl Tour began offering their services to curious tourists, offering day-long or three-day guided tours to visitors willing to enter the exclusion zone — occasionally known as the “Chernobyl Nuclear Power Plant Zone of Alienation.”

SoloEast boasts being “the first and still the best,” having provided “Chernobyl trips from the creator” since 1999. Chernobyl Tour, which includes $5 “compulsory medical insurance” in its ticket price, has been around since 2008. While its website promises an “eye-opening experience of post-Apocalyptic world,” it also says you can catch Przewalsky horses, wild boars, and even moose in the Exclusion Zone landscape, if you’re lucky. Part of the appeal is discovering what can happen post-post-apocalypse.

On these tours, which can cost anywhere from $90 to $165 per day, visitors typically enter the Zone through an official entrance known as the Dytyatky checkpoint. Inside are multiple abandoned villages: There’s Zalissya, peppered with abandoned houses and barns. In Chernobyl proper is the turquoise-and-white St. Elijah Church, the Wormwood Star Memorial, and the memorial “To Those Who Saved the World,” commemorating those who risked their lives to clean up and contain the radioactive fallout. Kopachi is home to the eerie, often-photographed kindergarten classroom, with its desks and dolls still intact.

In his Chernobyl tour video, YouTube science presenter Veritaserum describes the old kindergarten as “incredibly peaceful” as his camera pans over abandoned desks, workbooks, and dolls. “It looks like a disaster has hit here, but mainly what it shows is 30 years of weathering and no maintenance,” he says. “Things just fall apart.”

Of all the towns tourists pass through on their tour, Pripyat — once home to 50,000 people — is the most iconic. Among the attractions are the abandoned town hall, a fire station, the abandoned Polissya hotel, and a recreational park once used by Pripyat youth known as the “Energetic Palace of Culture.” An eerie ferris wheel, standing in the middle of an amusement park that never got to open to the public, towers over the empty city.

And then there’s the power plant itself: from a distance of roughly 1,000 feet, visitors can observe the plant, together with its uncompleted reactors and new “sarcophagus” — a confinement structure acting as a safer, more permanent replacement for the hastily constructed structure built immediately after the accident. Nearby is an old Soviet listening station known as “Woodpecker,” secretly constructed as an early warning system for missiles in the 1970s.

All of the companies offering tours insist that touring the area is completely safe. Many of them encourage tourists to rent Geiger counters for an additional fee, suggesting that the low-grade clicking of the instruments in response to residual radiation is part of the immersive experience. Still, disclaimers warn visitors not to touch objects and plants and not to sit on the ground, and body scans for contamination with radioactive dust are compulsory upon exiting the Zone.

Fears of radioactivity sickness haven’t stopped nearly 10,000 visitors from descending upon Chernobyl each year. On travel review sites like TripAdvisor, the majority of users insist that the experience was completely safe; One user offered a rave review of his visit: It was “gripping” and “fantastic.” He presented this convincing argument after his visit this past January.

For anyone concerned about the radiation exposure, the group were carrying 2 Geiger counters, which at the end of the day both showed our exposure to be 0.002µSV - doing this tour every day for a year would still be much less radiation than a chest x-ray.

The companies running the tours seem to operate legally, citing approval from the Ukrainian Ministry of Health. This wasn’t always the case; in the years immediately following the accident, visiting the site meant weeks of negotiation with the Soviet authorities. Whether visiting Chernobyl right now is truly safe remains to be seen, as even the effects of the accident itself aren’t fully understood.

Despite questions of safety, visitors insist that it’s worth the risk, calling it “spooky” and “sad” and describing the experience as “being sent back in time to 1986.”