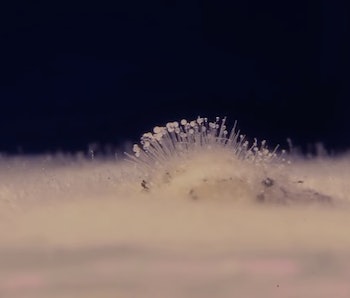 After Sunday night’s tragic episode, hearing the Game of Thrones theme song might trigger traumatic flashbacks, but you should check out this strangely organic and beautiful video all the same.

The Game of Thrones title credits are some of the most riffed-on videos on the internet — we’ve seen them in 360 degrees and as an old man eating soup (seriously), and now, because the internet continues to give us The Very Important Content we deserve, someone has made a stunningly cinematic mashup of the Thrones theme with a beautiful tilt-shift video of growing mold.

Turns out, when you stick a high-definition camera next to a petri dish with mold cultures, the resulting footage is pretty damn cool. Spoors bloom and open like the tiny clockwork towers of the Thrones intros as the camera slowly pans around. The original post on Reddit made commenters pretty uncomfortable (watching poisonous fungus grow in an extreme closeup is pretty freaky). The mold in the video is a type of Aspergillus fumigatus, which is one of the most common wild molds that can cause diseases in immune-compromised individuals. In other words, the mold is about a killer as the show. Commenters in the original thread quickly soon jumped on the fact that the slow-pan camera shots were highly reminiscent of everyone’s favorite medieval-inspired fantasy-bloodbath, and because Reddit is Reddit, Game of Molds was a thing minutes later.

Check it out below.

And here’s the source video, which is much longer (with an atmospheric Cosmos-style soundtrack).

More like this
Entertainment
November 17, 2022
The White Lotus is stealing a dangerous narrative trick from Game of Thrones
By Jake Kleinman
Entertainment
November 16, 2022
House of the Dragon Season 2 could show the decline of a powerful family
By Mónica Marie Zorrilla
Culture
November 25, 2022
How Wes Craven’s smartest slasher reinvented a horror icon
By Chrishaun Baker
Share: