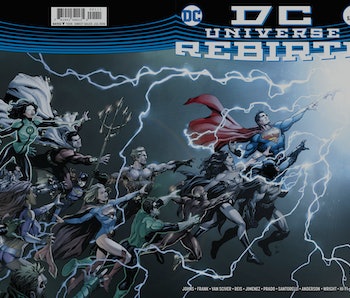 DC’s Chief Creative Officer Geoff Johns wrote Rebirth #1 as a temporary farewell to the comic book medium. Inverse met with Johns in Manhattan to discuss his changing role at the company, and why he’s comfortable moving onto DCU films after producing this particular comic.

To Johns’s credit, Rebirth is a stunning superhero story, shocking enough in its choices to charge up the reader, and steeped enough in genuine emotion to make its characters — oldies we all know, including Batman, The Flash, Aquaman — feel like present, culturally relevant personalities. Rebirth is chock full of moments fans will be analyzing for months. When we mentioned this to Johns, he smiled, seeming relaxed. Upon first handing us the comic, however, he interrupted himself, exclaiming, “No, don’t flip to the last page. Trust me!”

Johns’s final page is a doozy; after a long and winding search for who (within the DC universe) stole Batman and the other characters’ vitality, their reasons for being, their connections and legacies and history, Batman digs into the wall of the Batcave and discovers The Comedian’s pin, from Alan Moore’s seminal graphic novel, Watchmen, which was published by DC in 1986 and 1987. Johns is, understandably, worried that the internet will explode at the plot twist, pitting DC’s superheroes against the Watchmen line-up, hoping for simple clicks based on the kookiness of the premise. “It’s more than that,” he says; and he’s right. For that reason, it’s a shame that Rebirth leaked, in disconnected pages and segments, on Reddit last night. The volume must be read, in its entirety, in order to be understood and appreciated.

The most simple plotline in Rebirth is this: Wally West is being sucked into the Speed Force, slowly and painfully, and he risks being forgotten by all the other DC superheroes. In trying to break out of the Speed Force, he appears to characters whom he believes will remember his name, but none of them do. While trying to survive, he’s tugged all over the DC universe, peeking in on lesser heroes and villains, all characters Johns says will appear in future post-Rebirth issues.

He finally finds Barry Allen, the original Flash, and just after accepting his own death and thanking Barry for every good day, Barry remembers him and grabs his arm, pulling him back into reality. Wally speaks with Batman in the last few issues of the comic, and they both agree that some unseen, insidious presence has been toying with DC heroes, making their stories weaker. Their connections have begun to feel false, and their appeal has been decaying, but why? In the final panel of Rebirth, Batman discovers, as we mentioned, The Comedian’s pin. The epilogue suggests Dr. Manhattan has been emotionlessly screwing with DC’s heroes, experimenting with their stories but not understanding their humanity.

Johns has made DC’s past-mistake canon, in a way, by casting Dr. Manhattan as the clueless, but in-universe, writer of DC’s stories. …Get it?

Johns believes – correctly so – that the core message of Watchmen was grossly misunderstood and manipulated for decades following its release. The comic, Johns believes, was a warning not to become disillusioned with the values that have defined DC from the beginning: justice, legacies, epic storytelling, love. Watchmen was not an instruction manual for writing contemporary hero comics.

“If you don’t understand the ingredients that make, say, a good cake, then you’re not going to be able to make one. This stuff, [superhero comics], it’s alchemy. I’ve always been drawn to relationships. There’s an echo of Green Arrow and Black Canary in ‘Rebirth’ that suggests the heroes themselves miss their connections. If they miss it, we’re going to miss it even more.” Johns is referring to a touching moment in Rebirth, in which Oliver and Dinah meet eyes and feel a tug at something shared in their pasts — their romance together, pre-‘New 52’ — but can’t quite recall why they feel a spark for each other. Johns says Green Arrow, having lost what matters and feels good about his story, begins Rebirth as depressed, though he doesn’t know why.

That’s the beauty of Johns crafting a meta-text in Rebirth that’s in communication with DC’s most famous meta-text, Watchmen: he doesn’t sacrifice genuine emotion and vulnerability in the process of matching Alan Moore’s intellect. For Johns, superheroes like The Flash are motivated by the purest objectives in fiction. It’s not worth making every single superhero story dark and, to use a cliched word, gritty, because that marketing tool misses the point of superheroes entirely.

Readers, and Johns himself, believe the creators of the ‘New 52’ comics, in part incorrectly inspired by what they thought was a manifesto in Watchmen, are to blame for the loss of many beloved storylines and distinctive tones across DC’s pantheon. The ‘New 52’, and the direction DC films have gone in lately, have homogenized DC’s characters as grim spectacles, punching up giant foes and not feeling anything in particular for their teammates. Johns, and DC, have made the stunning choice to embody that extra-textual threat in Dr. Manhattan, who will be the literal foe for Batman and the rest of DC’s heroes, moving forward. “I promise it’s not going to be Batman and company punching Dr. Manhattan a bunch of times. That’s not how you combat something like this,” Johns says, laughing.

The final few pages of Rebirth are devoted to preview covers for upcoming storylines, including The Flash, Titans, Teen Titans, Batman, Green Lanterns, Green Arrow, Aquaman, Wonder Woman, Suicide Squad, Action Comics and Superman. What’s notable about each of these is a small plot summary, or conceit, under each title. Titans’s reads: “Wally West uncovers a secret that will destroy his friends!” Johns says this was intentional, for the first round of Rebirth comics. “I spoke with every creator and helped them get down to the core of what’s great about their hero, and what’s happening to them as we start.” Each of DC’s heroes are now being sold to comic book readers as individuals with existing connections; it’s an impressive attempt at reaching both new readers and fans of classic DC comics. Their stories are simplified and focused homages to their original, legacy comics.

Johns’ final comic for DC in a while is a triumph, and an optimistic shout into the void. DC’s success will depend on whether the team of creators DC has amassed to take up Johns’ call for legacy and honest storytelling have the skills to drive the endeavor home. As for Johns, if Rebirth is any indication of where he’ll take DC’s upcoming blockbuster films, we’re in for intelligent, emotionally resonant storytelling, and that’s the most exciting part of the comic. As Johns’s influence grows, DC will only benefit from having him sounding off on the brand’s largest decisions.