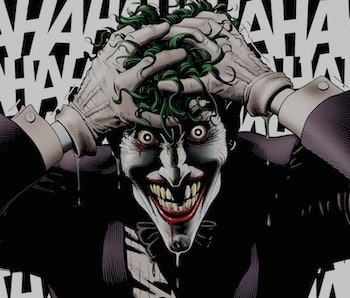 This past weekend at WonderCon in Anaheim, DC Comics revealed another massive change happening to the company’s comic book universe. Though it isn’t a total reboot like the polarizing New 52 reset from 2011, one of the biggest changes is the decision to give a definitive identity to The Joker.

In Justice League #42 released last July, Batman sat on the Mobius Chair that grants whoever sits all the knowledge in the world. Batman tests it out, first asking who killed his parents (“Yes, yes, Joe Chill. That’s right,” he says.) He then asks, “What’s the Joker’s true name?” The Mobius Chair answers — and only tells him, not the readers — and Batman freaks out. In Justice League #50, we’ll know why. But it’d be better if it remained a secret.

For over 75 years, The Joker has been the perfect chaotic foil to Batman’s order. Not only is the mystery behind the maniac fun to ponder, but it’s fueled by the fact that it doesn’t matter one bit. Yes, the Joker was a man before he became a clown, but he has transcended that personhood. He is a wicked parody of a human being, and his 70+ year existence is a living symbol to the chaos that plagues Gotham City.

The instability of the villain is essential to his position as Batman’s chief antagonist As a young child, Bruce Wayne saw the murder of his parents, the wealthy Thomas and Martha, shot dead by a desperate man in desperate times.

So who better to represent chaos than a clown, a circus archetype who shakes your hand before he pies you in the face? It’s only fitting that in the pages of DC Comics and in dozens of movies and shows, Gotham City is the permanent domain of America’s darkest years and the Joker its perfect mascot.

Anyone who dares give backstory to the Joker know best they shouldn’t. Alan Moore did in his 1989 classic, The Killing Joke which “explores” the Joker’s origin before pulling the rug from underneath it. With flashbacks to the Joker’s past as a chemical engineer who turns to crime after failing at stand-up comedy, Moore reaches the climax with Joker taunting, “If I’m going to have a past, I prefer it to be multiple choice!” Don’t believe anyone who brings up Killing Joke as an answer to the Joker’s origin. They didn’t read it very well.

Around the same time, the first modern Batman movie did give Joker a definitive origin story. Tim Burton showed his human side as a fashionable crime boss in his 1989 movie Batman — he was the murderer of Bruce Wayne’s parents, dipped in toxic chemicals. But Christopher Nolan knew better in his 2008 summer masterpiece, The Dark Knight. As adamant as Nolan was about keeping his Batman “grounded,” Nolan still knew not to bother with an identity for the Clown Prince of Crime. Like Moore, Nolan too taunts the audience with “multiple choices” to Heath Ledger’s villain, and it speaks to both Joker and Gotham’s frightening but poetic existence. The Joker’s misdirects are purposeful. He does it because he can.

For a while, it seemed as if the TV show Gotham was going to create a definitive Joker backstory. A prologue/prequel to Batman’s rise, Gotham wants to tell the origins to Batman’s infamous rogues gallery including the Joker in Season 2. He was “Jerome,” a child in a traveling circus. As it turns out, it was a ruse. Thankfully.

The Joker is what happens when a sprawling city like Gotham becomes a metropolitan loony bin. Anything can happen in the city’s dark corners, and that it spits out a monster like the Joker only emphasizes its mystery and allure. The Joker is Gotham, he cannot be explained but only understood. To shine a light on these corners is a gross misunderstanding of what the Joker represents. Some things are best left in the dark.