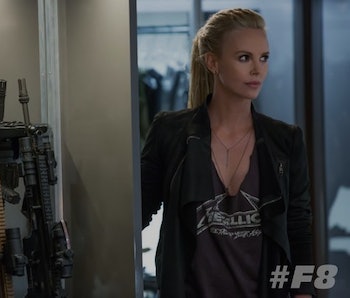 In a first look posted to the film’s official Twitter account, Theron’s character is revealed to be named Cipher, posited as the next antagonist with a penchant for vintage ‘tallica and leather. She’s seen in what looks like an armory stocked with assault rifles. She appears a worthy foe to Vin Diesel’s Dominic Toretto.

Importantly: Is Cipher the next Shaw sibling? The Shaws were introduced in 2013’s Fast & Furious 6 directed by Justin Lin, with Luke Evans as the villainous Owen. When Owen was thwarted by Dom’s crew, big brother Deckard (Jason Statham) seeks revenge in Furious 7 from James Wan. Statham is set to reprise his role in Furious 7, but now Theron’s Cipher is set to be another antagonist in the film. I really hope she’s a Shaw. She’s too good to not be a part of that messed up, over-powered family. Family is a dominant theme in these movies after all.

Speaking of family, Vin Diesel posted this goofy as hell Instagram video with Theron excitedly joining the Fast & Furious “family.” I guarantee you it’s the greatest thing you’ll see this week. This month. Maybe ever. It’s a lot better than all of 2009’s Fast & Furious, no question.