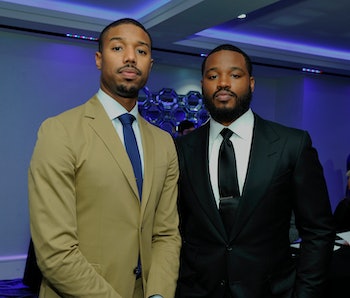 As the Marvel Cinematic Universe crosses the $10 billion mark from 13 films in just under a decade, the comic book entertainment giant is entering a new phase behind the scenes. After years of forcing its filmmakers to play second fiddle to the overarching schemes of complicated superhero storylines, the company looks like it’s finally allowing the directors behind their tentpoles to have some breathing room. Marvel may still have an auteur problem, but the specific casting and the artistic choices at work in their upcoming film Black Panther might mean the MCU could start to ease tensions and embrace the authorship of individuals films.

Up to now, the MCU has attracted small-scale filmmakers like the Russo Brothers to ferry the gigantic multi-threaded storylines and earn high profiles for it. Regardless of their previous cinematic talent, the majority of the people making their biggest hits weren’t auteur-driven filmmakers to begin with. The Winter Soldier and “Civil War might have made a bajillion dollars apiece, but it wasn’t because of the overwhelming artistic calling cards of the Russos. They’re unmistakably talented dudes who can deliver a tentpole blockbuster in on time and on budget, but they were primarily known for directing the caper comedy Welcome to Collinwood and some episode of Arrested Development before winning the franchise lottery with Marvel. The thing they brought to the table was their willingness to play the Marvel game — not graft their own brand of talent onto the larger story itself.

But that looks like it might change, and we have Ryan Coogler to thank. In a few short years, Coogler has emerged as one of the most exciting working American filmmakers, first, because of his socially conscious debut Fruitvale Station and last year with the transcendent Rocky continuation, Creed. It was only when he joined up as the director of Black Panther in January 2016 that Marvel’s outlook on the future of the cinematic universe began to take shape.

His hiring was most likely born out of the fact that Coogler could join a successful film franchise and still manage to make it his own. Creed came out of a deeply personal period in Coogler’s life when his father was sick, and yet, he managed to transplant his own emotions onto the film’s title character without stepping on the Rocky legacy. Unfortunately, Coogler’s hiring came in the wake of the exits of a handful of filmmakers on various Marvel projects that started their auteur problem in the first place — including Black Panther.

Selma filmmaker Ava DuVernay was the first name to helm the film, which will feature the first black superhero to headline his own movie. DuVernay’s previous films about black identity, strength, and adversity made her a perfect candidate to bring that kind of mindful touch to the normally manic MCU, but when she wanted to push her own ideas on to the movie, Marvel balked, and she walked.

In an Essence interview she offered a magnanimous explanation of her exit. “Marvel has a certain way of doing things and I think they’re fantastic and a lot of people love what they do,” she told the magazine. “In the end, it comes down to story and perspective. And we just didnt see eye to eye.

Read between the very obvious lines and it’s evident Marvel stifled the artistic process at some point, enough to make her want to go elsewhere.

The same famously happened for filmmaker Edgar Wright who worked on Ant-Man for the better part of a decade before Marvel got cold feet when they figured Wright’s hyper-unique brand of meta cinema wouldn’t gel well with the same-old, same-old. And it’s also the suffocating and oppressive blockbuster scale of the Marvel machine that chewed Joss Whedon up and spit him out even after he delivered what became two of the highest grossing movies ever made. Earlier this year at a talk during the Tribeca Film Festival, he lamented the fallout from Age of Ultron and conceded: “The things about it that are wrong frustrate me enormously, and I had probably more of those than I had on the other movies I made.”

Marvel’s hire of Coogler looks like a masterstroke. On the back of lead actor Chadwick Boseman, who was seen as the highlight of Civil War, Coogler enlisted the help of Oscar-winner Lupita Nyong’o as well as Michael B. Jordan, whom Coogler has worked with closely over the years. Coogler, quite simply, is making this movie his own thing by making all the right moves.

DuVernay even gave her blessing: