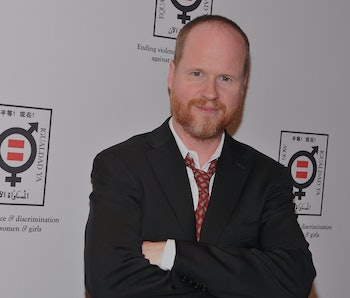 Marvel fans know Avengers: Age of Ultron basically ruined Joss Whedon, at least for a little while. Earlier this year during a Q&A at Oxford University’s Oxford Union, Whedon admitted, “I made a completely clean break [from Marvel] — not because we had a falling out — just because I was like, ‘I can’t.’” The arduous shoot and the demands of the Marvel Cinematic Universe machine led the noted geek-friendly auteur to pack in the whole superheroes thing for good. Whedon elaborated on his experience this week, while at the Tribeca Film Festival alongside his Age of Ultron actor, Mark Ruffalo.

Whedon’s responses, and his normally jovial and self-deprecating nature, give way to some serious insight about working in Hollywood.

Per Variety, here’s what he had to say about the Age of Ultron fallout:

“I think that did a disservice to the movie and the studio and to myself. It was not the right way to be, because I am very proud of it. The things about it that are wrong frustrate me enormously, and I had probably more of those than I had on the other movies I made. But I also got to make, for the second time, an absurdly personal movie that talked about how I felt about humanity, and what it means, in very esoteric and bizarre ways, for hundreds of billions of dollars. The fact that Marvel gave me that opportunity is so bonkers, and so beautiful, and the fact that I come off of it feeling like a miserable failure, is also bonkers, but not in a cute way.”

So, yes, Whedon didn’t enjoy himself, but he says he’s grateful to have made a fairly personal movie on a grand scale. Marvel fans should agree with him. Aside from all of the dumb scenes in Avengers 2 that featured Thor flopping around in a pool, the Avengers team had a vibrant charisma when together onscreen, and that charm is seriously lacking in a lot of the other standalone Marvel films.

The critical reaction to Civil War seems to indicate the baton has finally been adequately passed to the Russo Brothers. But until we get a fan consensus, Whedon’s contributions to the MCU, for better or worse, can’t be beat. But don’t think any goodwill from fans and collaborators will get Whedon back behind the cameras with Iron Man, Captain America, and the whole gang again.

Ruffalo apparently told the audience to pressure Whedon into doing “Avengers 3 and 4, Hulk 3 and Thor 3.” Whedon’s response via Ruffalo: “I’ve been begging him, and he said I’ll never do it again.”

More like this
Entertainment
7.29.2022 12:00 PM
Doctor Strange star reveals the Avengers character she wants to “interact” with most
By Eric Francisco
Culture
7.26.2022 11:00 AM
MCU Phase 5: All 12 movies and shows announced so far
By Robin Bea
Entertainment
7.30.2022 10:30 AM
The Marvels leak could confirm a major Avengers: Secret Wars theory
By Dais Johnston
Related Tags
Share: