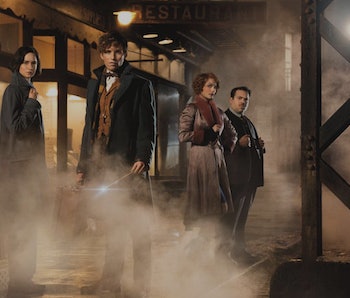 Three days ago, Ian Cervantez announced he’d been poking around the javascript in Pottermore when he came across an unreleased quiz in the site’s code. The quiz appeared to be something akin to the Sorting Process made famous in the Harry Potter books and movies. But the proper nouns were all wrong. The quiz Cervantez uncovered sorted students at a school called Ilvermorny School of Witchcraft and Wizardry into four distinct houses.

While this information remains unconfirmed by Warner Bros., it’s nonetheless an enticing clue into the world being established by this November’s hotly anticipated Fantastic Beasts and Where To Find Them. The plot of the film will find British academic Newt Scamander visiting the American Hogwarts in his quest to wrangle a series of exotic magical creatures. Until now, any information surrounding that school has been shrouded in mystery.

According to Cervantez — who, funnily enough, was actually trying to prove that javascript can be an inadvertent open door to unauthorized data leaks — the four houses of Ilvermorny are Thunderbird, Wampus, Horned Serpent, and Pukwudgie.

The houses all seem to have some connection with mysticism and the natural world. According to comicbook.com, the Thunderbird and the Horned Serpent are both associated with storms and thunder, while the Horned Serpent and the Pukwudgie are both ascribed talents with invisibility. (The Wampus, meanwhile, is just a big ass cougar.)

How prominently Fantastic Beasts and Where to Find Them will display these houses remains to be seen. It’s entirely possible those names could change before November (seriously, rethink Pukwudgie). We’ll find out, though, when Eddie Redmayne steps into the shoes of Newt Scamander as he journeys through early twentieth-century America in search of new knowledge and adventures.