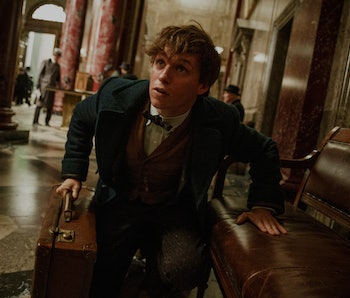 As we draw nearer to November and the theatrical release of Fantastic Beasts and Where to Find Them, we’re get more and more details about the setting and the characters, including the fabled Newt Scamander. But we haven’t yet heard much about the beasts themselves, which is curious.

Based on the short book by the same name released in 2001 by J.K. Rowling, Fantastic Beasts and Where to Find Them is sure to have beasts aplenty, and will likely feature a few from the origin text. So, let’s take a look at some of the most fantastic entries we hope to see in the film.

Described as a small blue-winged insect from Australia, the Billywig doesn’t pose any great danger, unless a wizard has been stung repeatedly or is severely allergic. Stings, while perhaps uncomfortable in the immediate aftermath, produce giddiness in victims, followed by levitation. Naturally, recreational provocation of Billywigs is a favorite pastime of wizards in Australia, and their stings are “believed to be a component in the popular sweet Fizzing Whizzes.”

The chances of seeing a Demiguise in Fantastic Beasts may be slim, since the film is set in North America and these beasts live the Far East. Even so, a peaceful herbivorous beast, “something like a graceful ape in appearance” would be a treat to see, and the fact that its hair can be used to make Invisibility Cloaks is certainly compelling.

Simply called a “dodo” by Muggles, the Diricawl is a “plump-bodied, fluffy-feathered, flightless bird.” Capable of vanishing and reappearing in a different place, they’re very adapt at avoiding prey, and it’s because of this ability that Muggles assumed them extinct, when they’d simply relocated.

Another bird, the Swooper, is known for its brightly-colored feathers and its song. Fantastic Beasts says, “Though at first enjoyable, Swooper song will eventually drive the listener to insanity and the Swooper is consequently sold with a Silencing Charm upon it, which will need “monthly reinforcement.”

Scamander says that the Jarvey, “resembles an overgrown ferret in most respects, except for the fact that it can talk. Though a Jarvey isn’t capable of holding a conversation — much less a civil conversation — it does speak at length in “short (often rude) phrases.”

A Jobberknoll is largely unremarkable — that is, until it dies, at which point it produces “a long scream made up of every sound it has ever heard, regurgitated backwards.”

Likely the most chilling entry in Fantastic Beats, that of the Lethifold describes a nocturnal creature that looks like a black cloak and suffocates victims while they sleep. Disturbingly enough, because the Lethifold digests the entire body of its prey, the actual number of those who have been killed by them is incalculable. That said, largely because death by Lethifold is impossible to confirm, feigned Lethifold attacks are a popular method for faking deaths.

A rare bird that’s golden, round and incredibly fast, the Snidget was once hunted for sport and because of its very valuable eyes and feathers. According to Quidditch Through The Ages, Snidget-hunting permanently altered the game of Quidditch in 1269 when Barberus Bragge (Chief of the Wizards’ Council) introduced a Snidget to a match and offered 150 galleons to the player who caught it. The Snidget became a part of the game from that point forward until nearly one hundred years later when the dwindling number of Snidgets prompted a ban on hunting the birds and using them in Quidditch. Though Quidditch enthusiasts panicked over what would become of the game, a wizard named Bowman Wright would create the Snidget’s substitute: The Golden Snitch. Essentially a charmed metal ball, the Snitch flies very quickly and behaves erratically, much like its living inspiration, but doesn’t carry hefty penalties for mistreatment.

This is exactly what it sounds like, and it sounds awesome.